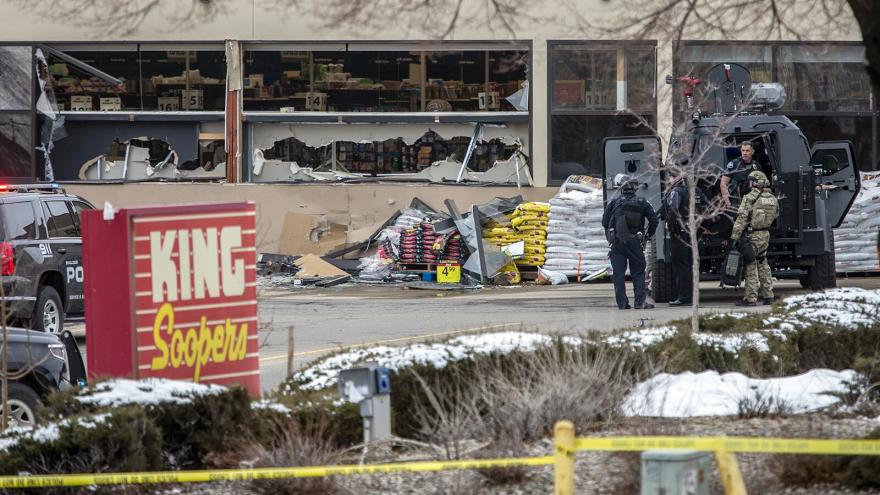 Tactical police units respond to the scene of a King Soopers grocery store in Boulder, Colorado, after a shooting on Monday, March 22.

(CNN) -- A trip to the grocery store turned into a fight for survival at a King Soopers in Boulder, Colorado.

The shooter entered the store Monday afternoon and opened fire, killing 10 people -- including the first Boulder police officer to arrive on the scene.

While families agonized for hours waiting to learn the fate of their missing loved ones, several survivors described the surreal attack.

'I just nearly got killed for getting a soda'

When the gunfire started, some customers were confused.

"Maybe somebody dropped something," Ryan Borowski said. "The second shot came. And then after that, it was, 'Bam, bam, bam!' And I was running."

He and others bolted and "busted through the back doors to the employee area," Borowski said.

Customers and employees worked together to quickly navigate the twists and turns in the back of the grocery store.

"We were all running, single file, finding our way through the maze of the back of the house," Borowski said.

"I had my hand on somebody else's back, and somebody had their hand on my back, so nobody was tripping or falling."

About a dozen people managed to escape with him out a back door, ducking underneath a trailer before reaching safety, he said.

"Boulder feels like a bubble, and the bubble burst," Borowski said. "This feels like the safest spot in America, and I just nearly got killed for getting a soda and a bag of chips."

A woman is killed in front of children

Steven McHugh's son-in-law was third in line for a Covid-19 vaccine when the shooter came in and killed the woman at the front of the line.

McHugh's two granddaughters were with their father and were on the phone to their grandmother. The grandmother heard about eight shots over the phone before the dad grabbed the two girls and ran upstairs, hiding in a coat closet for 45 minutes.

"They were right there, from the first shot to the last," McHugh said.

Along with the scale of the tragedy, McHugh worries about the lasting impact on his grandchildren.

"The intensity and awfulness is going to last with them for the rest of their lives," he said.

"No family should ever have to go through this again in the United States."

A friend texts: 'Thank you for everything'

Andrew Hummel "heard a loud bang, and then everybody kind of sprinted toward the back of the store," he told CNN affiliate KMGH.

"There was so much going on in such a compact area."

As soon as Hummel got out, he called his parents and his friend and roommate, Mason, who works at the store, he said.

His first priority was making sure Mason got out safe. He later learned Mason was hiding in a storage room with other customers.

"One of the biggest scary texts he sent, he just said, 'I love you guys. Thank you for everything in case things go bad.' That was a really hard text, especially me being in this situation," Hummel said.

"That was something I would never want to hear from any of my friends. It was horrifying. It was truly horrifying."

Quiet, then random shots of fire -- and store music

Maggie Montoya, a pharmacy technician, was signing up people for Covid-19 vaccine shots when she heard the first gunshot.

Her store manager was first in line for the shot, and the manager yelled out "active shooter, and we all just scattered," Montoya told CNN's Anderson Cooper.

Montoya took shelter in the counseling room, next to the pharmacy, she said, hiding under a desk. She heard more gunshots and some screaming, she said.

"Then it was just quiet for a long time with just the store music and random shots of fire throughout the store," Montoya said.

Both she and the pharmacist called 911, but as the shooting continued, Montoya said she hung up and dialed her family instead.

"Hey, I just want to let you guys know there's an active shooter in the store. I love you," Montoya said she told her parents.

After about an hour, when police announced they had surrounded the building, Montoya said they heard the shooter just outside the pharmacy: "I surrender. I'm naked," he said, according to Montoya.

"They found his weapons right by the pharmacy," she said.

As Montoya walked out of the store, she saw bloody footprints leading from the pharmacy out the door, she said.

And she saw the body of Rikki Olds, a front-end manager of the store.

"And that's when it all crashed down ... It all came crashing down seeing someone I knew dead, that wasn't going to be able to walk out to her family," Montoya said.

People in other businesses hear the shots

Jessica Crumby was lying on a table in a tattoo shop in the same shopping center as King Soopers when she heard about four gunshots.

"All of a sudden we just heard 'pop, pop, crack, crack,'" she said. "We kind of stopped what we were doing, and we heard some glass shattering."

Crumby went outside and saw a nearby yoga studio's window "looked like it had been shot in."

She saw people running out of King Soopers and heard sirens in the background.

Anna Haynes lives in an apartment across from the grocery store, and can see all of the front from her living room window.

When she heard about 10 gunshots, Haynes thought it was fireworks or a "car engine failing," and she looked out the window "expecting to see something like that."

"Instead, I saw a body in the middle of the parking lot," the University of Colorado Boulder student told CNN via Skype.

Haynes said she saw the shooter on his way to the store entrance when he turned around and started "shooting rapid fire at one particular target. I'm fairly sure it was a person."

The shooter then entered the store through the entrance for those with disabilities, she said, "And a few seconds later I saw people running out of the building. I heard screaming."

"It just devolved into chaos within just a couple of minutes."

At an apartment complex near the grocery store, a man named Ben was inside his apartment when the gunfire started.

"I didn't think much of it because it was all muffled from in my apartment," he told CNN affiliate KCNC.

Later, when he looked outside the window, he saw dozens of police officers -- including some from surrounding cities. And he saw 10 to 12 people being taken to a bus, he told KCNC.

"They pulled out a guy who had no shirt on, no pants and his whole right side of his leg was bleeding," Ben said.

"It's definitely super scary. I'm there twice a week getting my groceries, and I was actually about to go there until I saw all the cops outside."

Correction: A previous version misstated which person Steven McHugh said overheard the shots on the phone. It was the children's other grandmother.