Woman battling cancer gets married hours before passing away 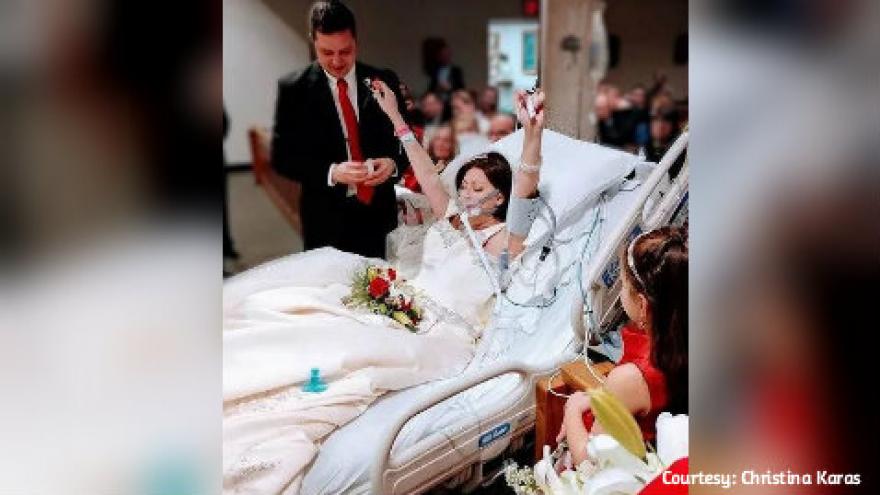 By Matt Campbell and Olivia Lank

Hartford, CT (WFSB) -- A photo has gone viral of a cancer patient marrying the love of her life before passing away 18 hours later.

The wedding happened at St. Francis Hospital in Hartford just a few days before Christmas.

"It reminds me of someone who is crossing the finish line of a marathon or something," said David Mosher.

David is the husband of Heather Mosher, who passed away just 18 hours after getting married.

"Nobody thought she would've made it that far. She proved them all wrong and that's what that photo says to me," David said.

Christina Kara is the bridesmaid who capture the pure joy and defiance in the face of death.

"She's getting to shout from the rooftops that she loves Dave and is able to say I'm his wife," Karas said.

David and Heather's love story started two and half years ago in May 2015 when they met at swing dance class.

"We were just kind of inseparable after that," David said.

The relationship moved fast. December 23, 2016 would be a pivotal, yet bittersweet day for the couple.

Heather was diagnosed with breast cancer.

"She didn't know I was going to propose that night, but I said to myself, she needs to know she's not going to go down this road alone," David said.

Later that December night, David went through with the proposal.

"A pair of draft horses, a carriage, and I arranged it all for that night. We went out on the carriage ride and I proposed to her under a street light," David explained.

Five days later, the diagnosis was triple negative, one of the most aggressive forms of breast cancer.

"We would go to Dana Farber weekly, we were going to natural doctors. Our life became consumed with cancer," David said.

This past year would be the hardest, most heartbreaking year for David and Heather. In September 2017, they learned the cancer spread.

"We found out it was in her brain and a couple months later, she was on life support with a breathing tube," David said.

Many people thought Heather wouldn't make it to October, but that's when the fighting spirit David fell in love with took center stage.

"She was tough. Anyone else would have given up a long time ago. The doctors even said we don't know how she's still here," David said.

Heather longed to live to see her wedding day, which was set for December 30th, but the hits kept coming. Doctors spoke privately with David last week about the date of the wedding.

So, the ceremony was moved up. It was held at the Saint Francis chapel on December 22nd with friends and family watching.

"I knew it was going to be the last time we were going to be together in a love way, it just seemed like the strangest funeral I've ever been to," David said.

"The last words she said were her vows," Karas said.

The vows were too tough for Karas to document, but the bridesmaid took her camera out towards the end, just in time to capture Heather's fleeting joy.

"We were losing her as we were all standing there, thinking, to hold onto this, because this was the last she had to give," Karas said.

On December 23rd, just 18 hours after the ceremony, cancer would force the couple to say goodbye.

It's the same date, where one year before, David and Heather got engaged under a streetlight.

"She's my great love, and I'm going to lose her, but I'm not losing her forever," David said.

December 30th was supposed to be the happiest day of David and Heather's life. Instead of preparing for a wedding at Plantsville Congregational Church, David will be attending his wife's funeral at the church, at the same time they were set to be married.

David said he's keeping a piece of his wife's spirit.

"Heather said, 'I want to keep fighting,' so that's the mantra I'm picking up. She was able to fight til the end, I'm going to fight until my end," David said.