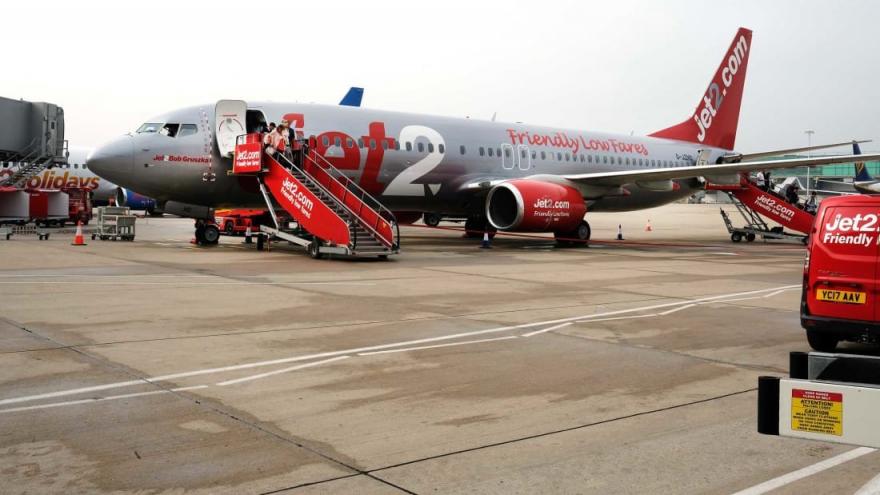 A passenger whose \"extremely disruptive behavior\" caused a flight to be diverted with a military escort has been sent a bill for £85,000 ($105,000) and permanently banned from the airline. Source: Bryn Colton/Bloomberg via Getty
By Amy Woodyatt, CNN

(CNN) -- A passenger whose "extremely disruptive behavior" caused a flight to be diverted with a military escort has been sent a bill for £85,000 ($105,000) and permanently banned from the airline.

Chloe Haines has been accused by British operator Jet2 of a "catalog of aggressive, abusive and dangerous behavior," including "attempting to open the aircraft doors," during a flight from London Stansted Airport to Dalaman in southwest Turkey in June.

The airline said that crew had to restrain Haines with the help of customers, and the aircraft was diverted back to London Stansted, escorted by two Royal Air Force (RAF) jets.

The jets created a sonic boom "which could be heard for miles around" as they rushed to escort the aircraft.

A spokeswoman for Essex Police, the local police force, said at the time that a woman, 25, had been arrested "on suspicion of two assaults and endangering an aircraft."

In a statement, Jet2 confirmed: "Jet2.com has issued a lifetime ban to disruptive passenger, Chloe Haines, and billed her more than £85,000 after her extremely disruptive behavior led to the flight having to be diverted and the RAF having to scramble two Typhoon fighters to escort the aircraft."

"Miss Haines' behavior was one of the most serious cases of disruptive passenger behavior that we have experienced," said Steve Heapy, CEO of Jet2, in a statement. "She must now face up to the consequences of her actions, and we will vigorously pursue to recover the costs that we incurred as a result of this divert, as we do with all disruptive passengers.

"As a family friendly airline, we take an absolutely zero tolerance approach to disruptive behavior, and we hope that this sobering incident, with its very serious consequences, provides a stark warning to others who think that they can behave in this fashion."

A spokesman for Jet2 told CNN that the cost of the bill reflects the cost incurred by the airline for the incident.