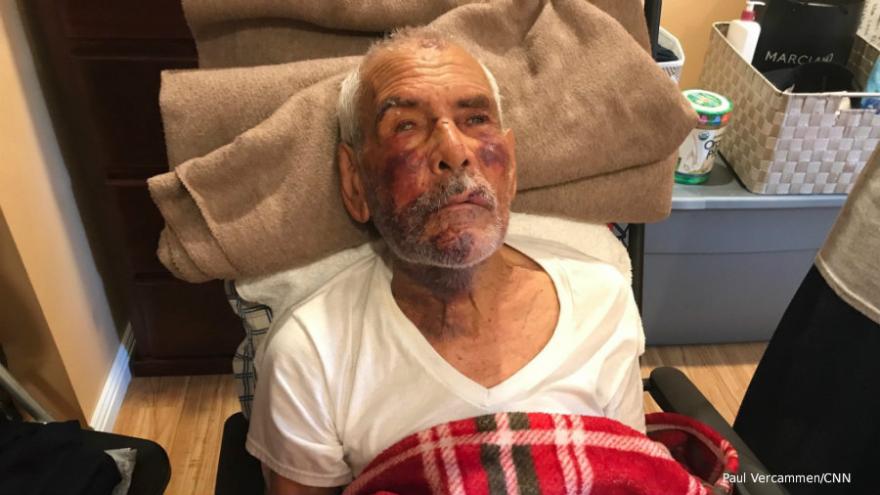 (CNN) -- A woman accused of attacking a 91-year-old Mexican man with a concrete brick has been charged with attempted murder.

Laquisha Jones, 30, was arraigned Thursday at the Los Angeles County Superior Court and stood behind her lawyer, away from TV cameras. She was also charged with elder abuse, infliction of injury.

She was arrested Tuesday on suspicion of beating Rodolfo Rodriguez, 91, on July 4.

Rodriguez said he had been walking to a park when he passed a woman and a girl. The woman assaulted him without warning, hitting him with a concrete brick and enlisting a group of men to beat him, he said.

"I didn't even bump into her kid," Rodriguez told CNN. "I just passed her and she pushed me and she hit me until she was done."

Misbel Borjas was driving by when she saw the woman hitting Rodriguez repeatedly in the head with a concrete brick, she said.

"I heard her saying, go back to your country, go back to Mexico," she told CNN by phone. "When I tried to videotape her with my cell phone, she threw that same concrete block, tried to hit my car."

The Los Angeles County Sheriff's Department said in a statement Wednesday that "detectives have discovered that this is not a hate-related incident."

Elderly victim: 'May God forgive her'

The felony complaint alleges that "the defendant personally used a deadly and dangerous weapon, a brick, during the commission of the crime and that she committed great bodily injury upon the victim," according to the Los Angeles County District Attorney's Office.

Prosecutors asked that Jones' bail be set at $1.125 million. She was previously convicted of making criminal threats in 2017, according to the LA County District Attorney's Office, and had been on probation, court record shows.

If convicted, Jones faces a maximum possible sentence of 29 years in state prison.

Rodriguez has said that he doesn't resent the woman who assaulted him. He told CNN affiliate KABC: "May God forgive her for what she did to me."