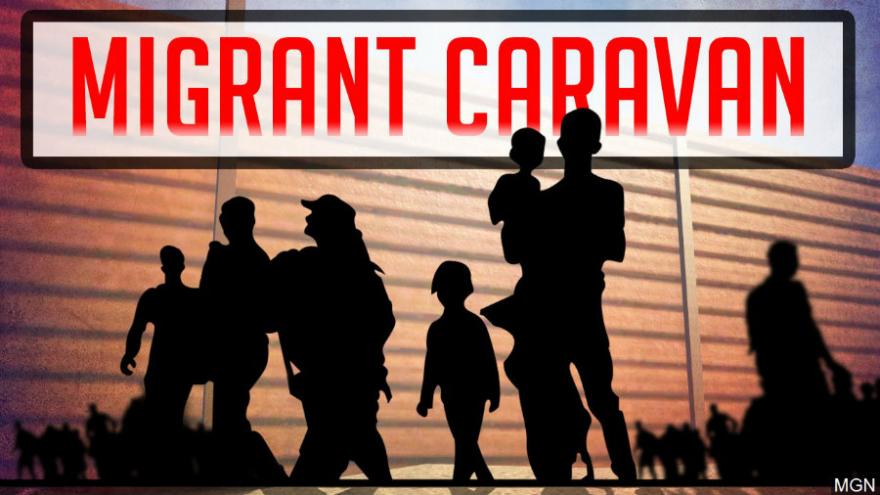 (CNN) -- She was one of 18 migrants caught 50 yards north of the US-Mexico border, traveling with four young children. A Honduran, she was also one of six charged with federal crimes from the group -- all Central Americans.

Now, separated from her children, she is firing back, alleging that Attorney General Jeff Sessions discriminated against her in singling them out.

The woman at the center of the filing, Olga George, told Border Patrol agents she wanted to claim asylum because she was a victim of domestic violence, according to the court filing from her lawyers moving to dismiss her case. After she said she wanted to claim asylum, authorities read her her Miranda rights and referred her for prosecution. She was then separated from her children and taken into custody.

George and the 17 other foreign nationals were apprehended last week by the Border Patrol in an area known as Goat Canyon, about four miles west of the San Ysidro Port of Entry, where more than 200 of the "caravan" migrants have been processed for asylum, and just 50 yards north of the US-Mexico border, according to the documents. Though the Justice Department said it suspected she was a part of the caravan, it wasn't clear if she was a member of the annual pilgrimage.

According to the motion from her attorneys, the group apprehended by Border Patrol agents included three Indian nationals, but only the Central American nationals were charged. No information was available about how the migrants from India ended up with the group.

The Department of Justice and Customs and Border Protection declined to comment and did not explain the status of the remaining migrants in that group.

Border Patrol statements say the three people who identified as Indian nationals were arrested with the rest, but the Department of Justice only announced it was prosecuting suspected members of the caravan from Latin America. Some were part of the group arrested in Goat Canyon. The announcement also mentioned prosecutions of migrants apprehended nearby.

Sessions and President Donald Trump have repeatedly criticized the caravan -- an annual pilgrimage of mostly women and children fleeing what they say are dangerous situations at home to make asylum claims in the US. The journey is held every year by an organization known as "Pueblo Sin Fronteras," or People Without Borders, to call attention to the plight of such migrants. In the past it has not drawn much media attention, but the President has tweeted repeatedly about the group this year as dangerous and evidence of a crisis at the border, and the administration has made numerous public statements about such a crisis.

"Our Southern Border is under siege," Trump tweeted on Friday.

Earlier in the week, he wrote, "The migrant 'caravan' that is openly defying our border shows how weak & ineffective U.S. immigration laws are."

George's lawyers point to the President's remarks, saying the evidence that she was targeted based on her nationality is "plain, given the overwhelming focus by the President and the attorney general on deterring and punishing people from Central America who formed a part of the caravan." They cite the public statements of Sessions and Trump in the filing.

They also note that Sessions and the administration have announced a "zero tolerance" policy for illegal entry into the US, meaning all individuals caught will be referred for prosecution. There is no clear record of the Indian members of the group being prosecuted in government databases.

In announcing the charges last week, Sessions heralded the prosecutions, which, including the six from George's group, totaled 11 cases.

"The United States will not stand by as our immigration laws are ignored and our nation's safety is jeopardized," he said in a statement. "US Attorney Adam Braverman and his team should be commended for quickly filing illegal entry charges for individuals apprehended along the southwestern border."

"These eleven defendants face charges now because they believed themselves to be above the law," Braverman said in the same announcement. "Those seeking entry into the United States must pledge fidelity to the law, not break them, or else face criminal prosecution."

According to the Border Patrol agent's statement, George had no known criminal record or previous immigration offenses, and she expressed a desire to claim asylum because she was a victim of domestic violence. But the court documents say she was found eligible for prosecution and thus charged, and there's no record of her asylum claim being processed yet.

Because she was being prosecuted, the documents say, she was separated from her children, who were to be given to a family friend she identified. As of publication, it's not clear from the record if the children had been handed over to the friend.

"The government cannot choose whom to prosecute based on alleged national origin," wrote the attorneys. "But that's exactly what happened here: the government arrested a group of people who were in the precise same situation, and selected only those whom it believed to be from Central America to prosecute while releasing the rest. This kind of arbitrary, selective enforcement cuts at the heart of the meaning of 'equal protection of the laws' and the fundamental protections of the Fifth Amendment's due process clause."

The filing requests the charges be dismissed, or at least that the government be ordered to turn over documentation about how it made its charging decisions.