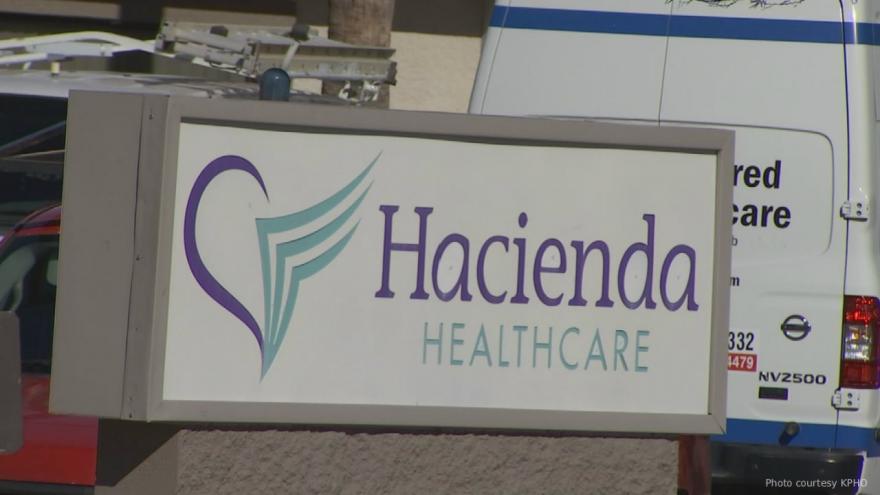 Sources tell Arizona's Family that the alleged victim has been a patient at the Hacienda HealthCare facility, which is near 16th Street and South Mountain Avenue, for at least a decade after a near-drowning incident left her in a vegetative state. That woman gave birth to a baby boy on Dec. 29.

“None of the staff were aware that she was pregnant until she was pretty much giving birth,” a source familiar with the situation said.

“How were they alerted to the fact that she was going into labor?” asked reporter Briana Whitney.

“From what I’ve been told she was moaning. And they didn’t know what was wrong with her,” the source said.

Arizona's Family also learned that the baby is alive.

“There was a nurse that was there, and from what I’ve heard she’s the one that delivered the baby,” the woman said.

“What do we know about the baby?” asked Whitney.

The source says the patient required around-the-clock care and many would have access to her room.

“She had no way to defend herself in this sort of situation?” asked Whitney.

“No. None whatsoever. Not even able to communicate the fact that she was pregnant,” she said.

The source said the facility has changed protocol this week.

“I was told that as of now, if a male staff needs to enter a female room, they need to bring in a female employee with them,” she said.

“And as far as you’re aware that is a new policy?” asked Whitney.

Investigators from multiple agencies are saying next to nothing about the case, but we know that at some point last spring or summer, someone sexually assaulted a woman who was in a persistent vegetative state, and she became pregnant.

"Hacienda Healthcare has been in business in the valley for over 50 years, and has an outstanding reputation providing high quality specialized care for our patients. As a Healthcare provider, we cannot comment on any patient due to Federal and State privacy laws. Additionally, we cannot comment on any ongoing investigations. We can say that our patients and clients health and safety is our #1 priority and that we always cooperate, when asked by any agency, in an open and transparent way."

The Arizona Department of Health Services also released a statement.

"We are aware of this situation and are actively working with local law enforcement in their criminal investigation. Upon learning of the allegation, Arizona Department of Health Services (ADHS) immediately initiated an onsite complaint investigation to ensure the health and safety of the patients and ensure the facility is in compliance with all state laws and regulations. During this time, the agency has required heightened safety measures be implemented at the facility including increased staff presence during patient interactions, increased monitoring of the patient care areas, and increased security measures with respect to visitors at the facility."

The Arizona Department of Economic Security released this statement.

"The Department has been made aware of these allegations and we continue to work fully with the Phoenix Police Department in their ongoing investigation. Upon hearing of these allegations, we immediately dispatched a team to conduct health and safety checks on all members residing at this health care facility, which has been completed. We will continue to work to ensure the safety of all our members."

4 Signs Your Heart Is Quietly Failing You How To Avoid A Heart Attack (Do This For 7 Seconds Twice A Day) Ad By PhysioTru See More Phoenix Police Sgt. Tommy Thompson said "the matter is currently under investigation."

"We have been informed of the situation that occurred at this healthcare facility and find the reports deeply troubling," spokesman Patrick Ptak said. "The governor was briefed on these reports as soon as our office learned of them, and our state agencies immediately began taking every measure to protect patient safety. The Phoenix Police Department is the law enforcement agency leading the criminal investigation, and we continue to coordinate with them to ensure the integrity of their investigation and bring about justice. As their work continues, our top priority is patient safety. To that end, we are re-evaluating the state's contract and regulatory authority as it relates to this facility and have been working closely with state agencies to ensure all necessary safety measures are in place."

In December 2013, the Arizona Department of Health Services conducted an investigation after a formal complaint was made. The report investigated staff treatment of clients.

The Arizona Department of Health Services determined Hacienda was not in compliance due to staff treatment of clients and staff training program.

The facility had to submit evidence of compliance or they would have been terminated from the Medicare program. You can read the 53 page report here.

Founded as Hacienda de Los Angeles in 1967, Hacienda HealthCare describes itself on its website as "the leading provider of specialized medical care and social services for Arizona’s infants, children and young adults who are medically fragile or chronically ill, including those with developmental disabilities."

The organization says it offers dozens of programs and services through several nonprofit entities under its umbrella.

According to its website, Hacienda HealthCare serves more than 2,500 people throughout Arizona each year. The facility has 74 certified beds.

On medicare.gov, Hacienda has a one star rating, which is "much below average."