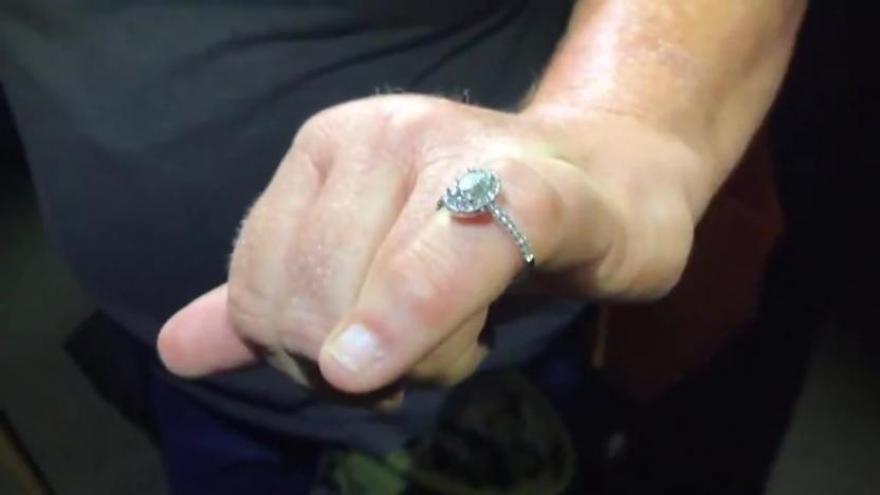 Gina Bopp lost her ring at Rockaway Beach in New York helping a little boy how got hit by a wave.

(CNN) -- A woman who lost her engagement ring the in waters of Rockaway Beach, New York, thought she would never see it again until she asked for help from some local treasure hunters.

Gina Bopp was at Rockaway Beach with friends when one of the young boys in her group got caught in a wave on Monday.

"I went to go grab him, and I felt my ring sliding off my finger," Bopp told CNN affiliate WLNY.

She searched for eight hours on her own before reaching out for some help. Merrill Kazanjian, of Metal Detecting NYC, answered that call.

"I saw how devastated she was, and one of the reasons I got into metal detecting is because I lost my wedding ring a week after I got married," Kazanjian told CNN. "You do whatever you can to help."

Kazanjian told CNN he went out with Bopp to find the ring for about three hours, but they came up empty. That's when he decided to employ the help of his treasure hunting friends from a group they call the "Scavengers."

"There's strength in numbers in this ... especially at the Roackaway Beach it's a long shot... so you call up the talent that you know," Kazanjian said. "Metal detectorists... they are rare people, good folks who really love to give back."

The treasure hunt is successful

Tracy Behling, a six-month novice of metal detecting, was the one who ultimately found the ring on Wednesday just off the sea line a foot and a half deep in sand only 40 minutes after they started looking.

"Here we are six months later, I found a ring," she told WLNY. "That is by far the coolest thing I ever found."

Bopp was of course the most excited in the whole group. Treasure hunter Louis Defeo got the entire reunion on video.

"Where did you find it? Can I give you a hug? Oh my gosh!...Unreal!" Bopp exclaimed when she saw Behling with her ring.

Bopp offered to give them money, but Kazanjian said they do it for the pure enjoyment of reuniting someone to their lost possession.

"I've seen it again and again, rather than hold on to a ring (we) would rather give it back to a person," Kazanjian said. "It's the joy, it's the positive rush you get from that, to see someone smile. The world needs that in 2020."