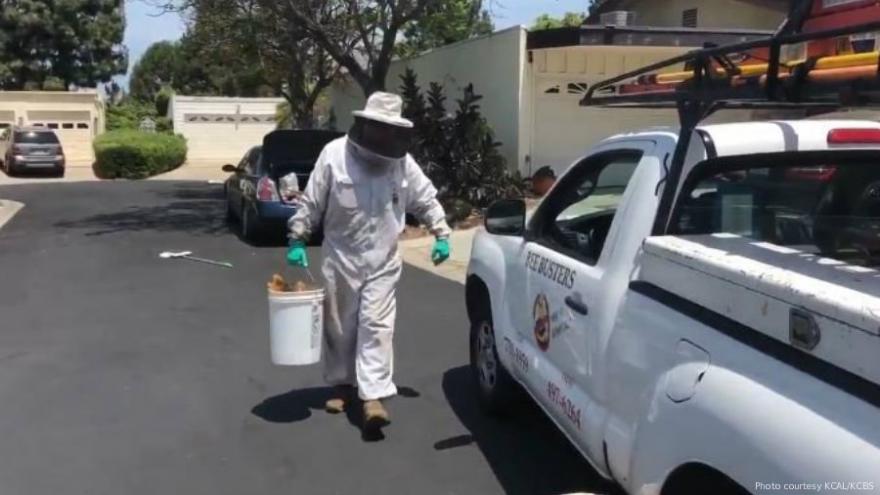 LOS ANGELES (KCBS-TV) -- A 52-year-old cleaning lady and four firefighters were hurt Monday after they were attacked by a swarm of Africanized bees, leaving the woman in critical condition.

CBSLA’s Stacey Butler reported Monday night that the woman’s son said that it appears she will survive her injuries from the bee attack.

The woman had arrived to clean a home in the 23000 block of Buckland Lane in Lake Forest just before 10:30 a.m. when she was attacked by a swarm of bees, according to Orange County Fire Authority Capt. Tony Bommarito.

According to witnesses Maria was in the house with the other three cleaning ladies when she decided to come outside to get a mop. She opened up the trunk and as she was looking in she turned and that’s when the bees hit her.

There was so many bees that when firefighters arrived they couldn’t even see her face.

“She probably had a few hundred if not a thousand bees just embedded into her hair and crawling all over her face,” said Orange County Fire Authority Firefighter Ryan Wilson.

There were as many as 80,000 bees in all involved in the attack, CBS2’s Dave Lopez reported.

Maria was stung more than 200 times.

Opting not to wait for special suits to protect them from the bees, the firefighters rushed in with a carbon dioxide fire extinguisher they typically use for grease fires, Bommarito said.

“They determined they needed to get that patient away from the bees, so they sprayed them with a carbon dioxide extinguisher and in the process all four got stung, two multiple times,” the captain said.

“They did an excellent job,” Bommarito said of the firefighters. “I hate to use the cliche that they made a life-or-death decision, but that’s just what they did. Hopefully maybe she lives based on what they did.”

An estimated 10 pounds of hives were also removed from the scene by a company that specializes in handling bees, according to Bommarito.

“It looks like she opened her trunk” next to the hives, which were “completely hidden”, Bommarito said.

“I was telling her move from the bees,” said the homeowner, Sarah. She heard Maria screaming, went outside and got stung herself on her arms and put the garden hose on Maria, hoping to chase the bees away. Hours later Sarah complained she was having breathing issues. Paramedics were called and she was taken to the hospital. She was released from the hospital and was back home Monday night resting. She is expected to make a full recovery.