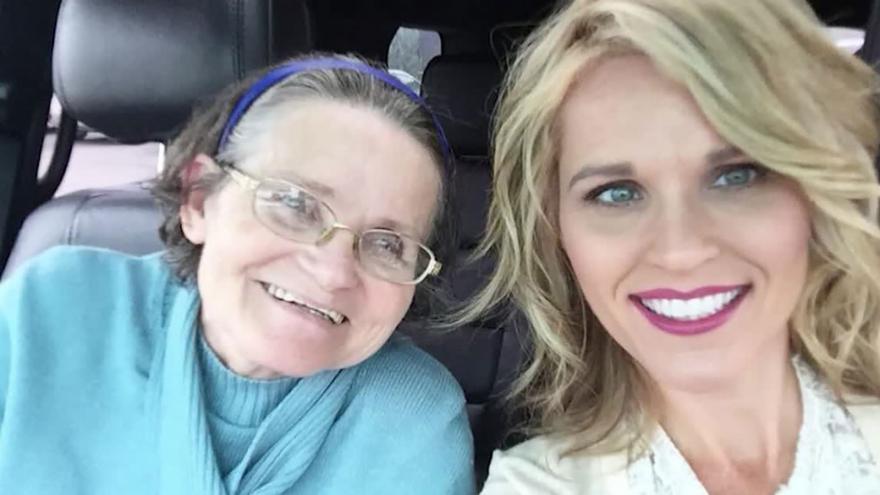 Janie Kasse already had full-time and part-time jobs, but after her mother\'s assisted living facility closed its doors to visitors amid the Covid-19 pandemic, she knew she needed a third job. Credit: courtesy Janie Kasse
By CNN staff

(CNN) -- Janie Kasse already had full-time and part-time jobs, but after her mother's assisted living facility closed its doors to visitors amid the Covid-19 pandemic, she knew she needed a third job.

As a hospitality aide at the Jeffersonville, Indiana, facility housing her mother.

"My mom is so used to seeing me all the time, and she just doesn't understand why she can't come out of her room and why I can't take her shopping and out to eat. It's hard on her," Kasse told HLN.

Kasse's mom, Carol Chesser, has been at Windsor Ridge since being involved in a near-fatal car crash. According to the Courier-Journal newspaper, across the Ohio River in Louisville, Kentucky, Chesser suffered a traumatic brain injury during a New Year's Eve car crash in 1976.

The 65-year-old can't read, write or use the phone, Kasse said. If a staff member turns on her television, which is definitely not Chesser's favorite pastime, it remains on until another staffer turns it off, her daughter said.

Kasse worried that while other residents might have things to do, such as crosswords or FaceTiming relatives, Chesser has no such faculty.

"They have the ability to do a lot of other thing to keep their minds busy, and my mom doesn't, so if she's not coloring -- which she loves to do -- she's just sitting there," Kasse said. "For me, I just couldn't imagine sitting there just all day."

Kasse was working full-time as an office manager and part-time as an event planner, but she figured she'd have time for a third occupation if it meant being able to see her mom.

"Even if she watches the news, she doesn't understand what she's hearing, so for me it was just a no-brainer," Kasse said. "The facility was hiring for a hospitality aide. They had been hiring that position before the pandemic and I applied and said, 'Why not? Let's just work there and then I can work my shift and then spend a little bit of time with her.'"

She now works 15 to 20 hours a week at Windsor Ridge, delivering meals. She spends the end of each shift with her mother, coloring and watching TV.

"A lot of the time, I'm just explaining to her again why she has to stay in her room," Kasse said.

After Tuesday night's shift, she reminded Chesser that she needed to stay in her room for her own safety, and her mother responded that she felt like she might be stuck in her room for the rest of her life.

"I was like, 'No you're not, I promise. We're going to go shopping. We're going to get to go do fun stuff, but right now this is really what's best for you,' and I have to remind her that everybody there is in their rooms.

"I think she feels like it's just her, so I'm glad I get to come in and spend a little time with her every now and then," Kasse said.