Women across Switzerland are striking for equal pay 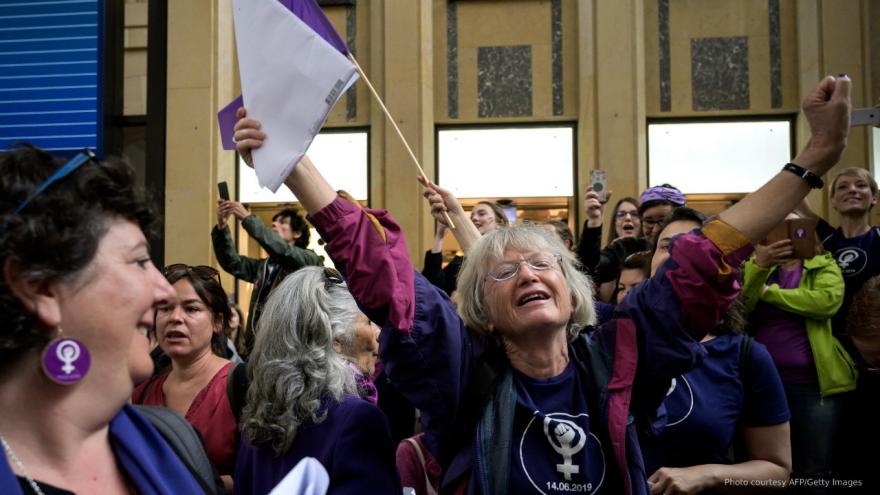 (CNN) -- Swiss women are striking en masse on Friday, in a 24-hour nationwide protest to highlight the country's poor record on gender equality and unequal pay.

The umbrella movement — which encompasses women from trade unions, feminist groups and women's rights organizations — argues that one of the world's richest nations has given half of its population a poor deal.

Minutes after midnight, the first protesters took to the streets under the demonstration's motto: "Pay, time, respect," kicking off a day of events aimed at drawing attention to a gaping divide in gender equality across the workplace and the home.

Workshops and demonstrations, flash mobs and stroller marches are scheduled in towns and cities across the country throughout the day, with a nationwide walkout timed for 3:30 p.m. local time (9:30 a.m. ET).

The strike is the first of its kind since 1991, when a similar protest saw some 500,000 women demonstrate against continued gender inequality across all sectors of life, 10 years after gender equality was enshrined in the country's constitution.

That movement eventually led to the passing of the Gender Equality Act in 1995, which banned discrimination and sexual harassment in the workplace.

But women's rights activists say that women are still systemically discriminated against in the professional world, that job security and advancement is limited, and protections for women facing harassment, abuse and violence are lacking.

On average, in full-time employment, Swiss women earn 19.6% less than men. While that number has dropped by nearly a third over the last three decades, the discrimination gap — the gap in pay that has no explainable reason — is on the rise.

Regula Bühlmann, central secretary for the Swiss Trade Unions Confederation, told CNN that although the law is in place to protect equality, women still "haven't achieved equal rights at work."

Bühlmann added that although the focus of the trade unions' protest was to highlight discrimination in the workplace, there are many reasons for women to strike, including the "everyday sexism" that prevails across many different aspects of society, and the burden that disproportionately falls on women in the home.

"What we really want is that men and women share paid and unpaid work equally, that women and their work is valued equally — or more — because at the moment, unpaid care workers are not valued," Bühlmann said.

In a 19-point manifesto The Women's Strike Geneva Committee, who have co-organized the movement, has called for better protections for women facing domestic violence and abuse, migrant women and domestic workers, increased parental leave and support for the LGBTQ community, among others.

Group member Kaya Pawlowska, 32, told CNN that she hopes that the widespread action will help to put the pressure on lawmakers to take concrete actions, just as the 1991 protests eventually did.

"It's not something that we can continue to consider that we might improve. We have a constitutional article that says we are equal, and there is absolutely no reason and no economic reason (to not be treated as such). We are not at war, we are not living under pressure, we can have this equality effectively."