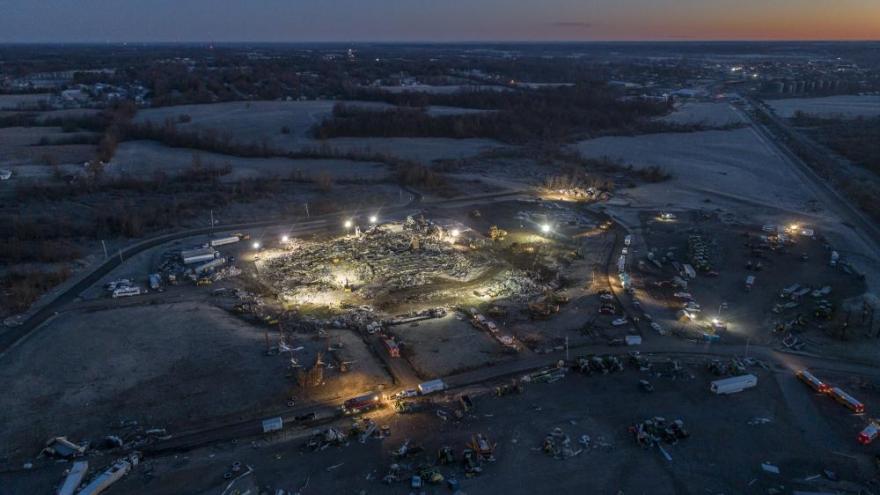 Workers at the Mayfield Consumer Products candle factory file a lawsuit against the employer. Pictured are search and rescue teams at the candle factory early December 12.

(CNN) -- A class-action lawsuit has been filed against Mayfield Consumer Products on behalf of candle factory workers alleging they were told they would be fired if they left work ahead of last week's deadly tornadoes.

One of the tornadoes ripped into the Mayfield factory, killing at least eight people. The storm was part of a deadly weather system that hit parts of the Midwest and South, leaving 85 people dead, according to state officials.

More than 100 people were working at the candle factory when the tornado swept in. Production had been "going 24/7," in part to meet Christmastime candle demand, US Rep. James Comer, who represents the area, has told CNN.

"There are many people with the same set of issues. We're asking for financial relief," Amos Jones, the Washington, DC-based attorney who is representing some of the workers, told CNN.

The lawsuit is based on the Kentucky equivalent of the federal Occupational Safety and Health Administration, or OSHA, statute, Jones said. The complainants seek an "unspecified amount" in financial compensation, he said.

"I've been making statements and every statement I've been making they denied it, and that's just not right," candle factory worker Elijah Johnson, who is represented by Jones, told CNN on Thursday. "They're neglecting everyone that's in there."

Johnson earlier told CNN that a candle factory supervisor told him he would be fired if he left.

Mayfield Consumer Products did not immediately respond to CNN's request for comment about the lawsuit. A spokesperson for the company that owns the factory previously said the company had spoken with supervisors working that night, who all denied any employees were told they'd be fired if they left.

Some employees did leave that night, and employees are generally free to come and go without retribution, company spokesperson Bob Ferguson previously told CNN.

Another worker at the factory that night, McKayla Emery, corroborated Johnson's account. She heard people ask a supervisor whether they could leave, and the supervisor "told them word for word: 'If you sign out, you more than likely will get fired,'" she told CNN.

Another worker who survived the storm at the factory did not hear any supervisors threatening to fire workers who left, he told CNN on Tuesday.

"You can basically sign out so they know you're gone and leave it at any time," Jim Douglas said from his hospital bed.

On the night the tornado hit, an interior wall fell on top of Douglas, striking him in the head and throwing him to the ground, he said. Douglas lay in pain, crushed beneath what he believes was about 15 feet of debris before rescue workers reached him, he said. He's now recovering from nerve damage and slowly gaining back the use of his arms and legs.