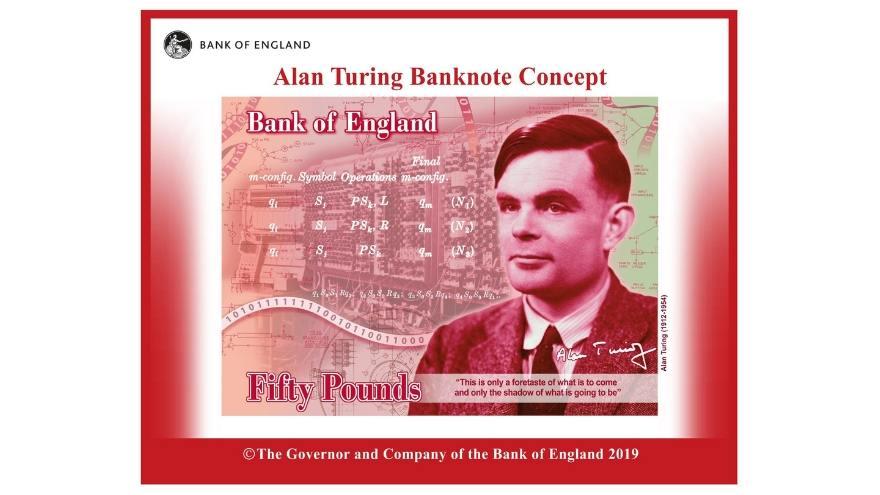 Alan Turing will be the new face of Britain\'s £50 note. Source: Bank of England

LONDON (AP) — Codebreaker and computing pioneer Alan Turing has been chosen as the face of Britain's new 50 pound note, the Bank of England announced Monday.

Governor Mark Carney said Turing, who did ground-breaking work on computers and artificial intelligence, was "a giant on whose shoulders so many now stand."

After the war he was prosecuted for homosexuality, which was then illegal, and forcibly treated with female hormones. He died at age 41 in 1954 after eating an apple laced with cyanide.

Turing received a posthumous apology from the British government in 2009, and a royal pardon in 2013.

The U.K's highest-denomination note is the last to be redesigned and switched from paper to more secure and durable polymer. The redesigned 10 pound and 20 pound notes feature author Jane Austen and artist J.M.W. Turner.

The Turing banknote will enter circulation in 2021. It includes a photo of the scientist, mathematical formulae and technical drawings, and a quote from Turing: "This is only a foretaste of what is to come, and only the shadow of what is going to be."

Former lawmaker John Leech, who led the campaign for a pardon, said he was "absolutely delighted" by the choice.

"I hope it will go some way to acknowledging his unprecedented contribution to society and science," he said.

"But more importantly I hope it will serve as a stark and rightfully painful reminder of what we lost in Turing, and what we risk when we allow that kind of hateful ideology to win."