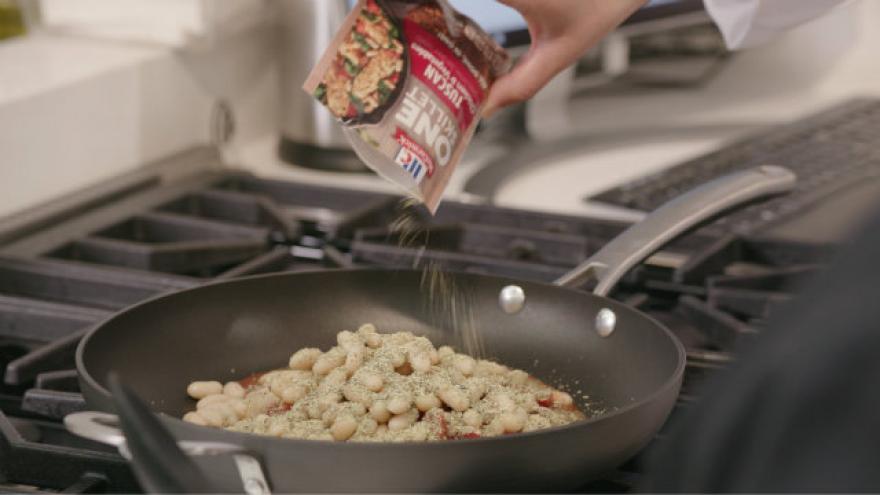 After 130 years, it can be hard to come up with new flavors, so the world\'s largest spice company is becoming the latest food producer to turn to artificial intelligence for help. Photo courtesy McCormick & Company

(CNN) -- After 130 years, it can be hard to come up with new flavors, so the world's largest spice company is becoming the latest food producer to turn to artificial intelligence for help.

McCormick -- the maker of Old Bay and other seasonings, spices and condiments -- hopes the technology can help it tantalize taste buds. It worked with IBM Research to build an AI system trained on decades worth of data about spices and flavors to come up with new flavor combinations.

The Baltimore, Maryland-based company plans to bring its first batch of AI-assisted products to market later this year. The line of seasoning mixes, called One, for making one-dish meals, includes flavors such as Tuscan Chicken and Bourbon Pork Tenderloin.

Hamed Faridi, McCormick's chief science officer, told CNN Business that using AI cuts down product development time, and that the company plans to use the technology to help develop all new products by the end of 2021.

This isn't the first time AI has been used to finesse food. But it's just starting to become serious business. Brewer Carlsberg, for instance, is using sensors and machine learning to predict how beer will taste. Some companies are wholly devoted to the idea of using AI to spruce up food and drinks, such as Foodpairing, which uses data analysis and machine learning to help restaurants come up with new menu items and cocktails.

In McCormick's case, the AI system was trained on data about raw ingredients, seasoning formulas, sales, trend forecasts and consumer tests of products. It can suggest formulas (such as for a new kind of seasoning) that it predicts will be novel.

Faridi said that the company's developers -- most of whom are food scientists, chemists, chemical engineers, nutritionists, or chefs by training -- typically create a new product by starting with a basic recipe (for, say, gravy or mustard) called a seed formula and building up from there.

A potential product may go through 50 to 150 iterations before McCormick settles on a final formula, Faridi said. It will then be tested in a lab, with sensory experts and then with consumers. The whole process can take anywhere from two weeks to six months.

Faridi said McCormick's use of AI can reduce the time it takes to create a new product by two-thirds.

Because getting products to market fast can be a problem for all kinds of consumer-geared large companies, the move makes sense to Erin Lash, an analyst at investment researcher Morningstar covering the packaged food and household and personal care industries.

"I think a number of firms are looking for ways to address that and grease the wheels of their own innovation cycle," she said.

With AI, the recipe developer still identifies a seed formula to start, and may set some parameters for ingredients that shouldn't be replaced in a recipe. The system will suggest new formulas, which McCormick's product developers can refine and taste, then send on for consumer testing (and, perhaps, eventually turn into real products). The system also improves over time with feedback it gets from developers, according to Faridi.

So far, AI has led to some flavor combinations that humans might not otherwise consider because of cultural biases about what will taste good to whom, said Richard Goodwin, principal research scientist at IBM.

For example, one developer was working on a recipe for pizza seasoning, and the AI suggested adding cumin. Though it's outside the norm for pizza spices, she tried it, and liked it.

But there are misfires. At one point, while trying to get AI to produce a new rice dish recipe, the computer removed rice from the list of ingredients and replaced it with salt, Goodwin said.

"It created a very nice seasoned salt," he said. "But wasn't what the product developer was tasked with developing."