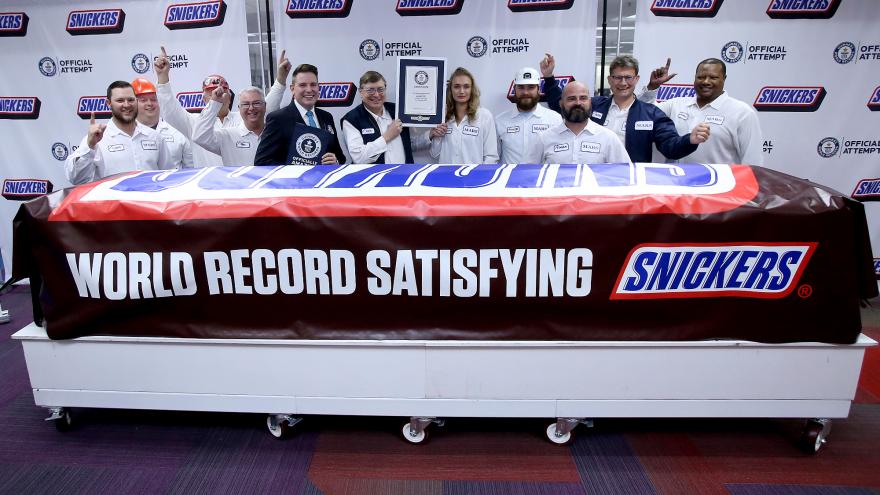 Mars Wrigley employees pose with a giant Snickers bar made at the plant in Waco, Texas. Credit: Jerry Larson/AP
By Nicole Williams, CNN

(CNN) -- Bring on the sugar rush. This Snickers bar is a chocolate addict's fantasy -- and a health enthusiast's nightmare.

Weighing in at more than 4,700 pounds and measuring two feet high and 26 inches wide, the Guinness Book of World Records declared Waco, Texas, as the home to the world's largest Snickers bar Thursday.

It is the size of 43,000 single-size Snickers bars put together, according to CNN affiliate KWKT.

"This is incredibly impressive," Guinness World Records adjudicator Michael Empric told the station. "Some of my favorite record categories are big food because it has to be edible and it is also an engineering feat, so to get a 5,000 pound bar of chocolate to stay together is really challenging."

And where was this master creation made? Where else, but the Mars Wrigley plant in Waco.

The plant calls itself one of the world's largest producers of candies such as Snickers, M&M's and Skittles.

The bold idea came to fruition only two weeks ago, and the bar took a week to complete, KWKT reported.

And it's only fitting that the epic, massive, colossal candy bar was made in the Lone Star State because, yes, "everything is bigger in Texas."

"This bar that we made in the last week absolutely is the (sum) of, I think, what you could call, 'Everything is bigger in Texas.' Because it's the biggest Snickers bar ever made," Snickers value manager Ruud Engbers told the station. "It's the largest chocolate nut bar ever made in the world."

Mars says this world record is a tease to the Snickers Super Bowl commercial sent to air on Sunday, February 2.

"So what's great about this record is that the factory workers here don't normally have the opportunity to do something on the scale," Empric told the station. "They make a product everyone loves and eats on a daily basis, but to do it on the scale and to really go and do something above and beyond is really inspiring."

How can I get a taste? You have to be an employee. The plant plans to give out pieces of the bar to Mars workers around the country.