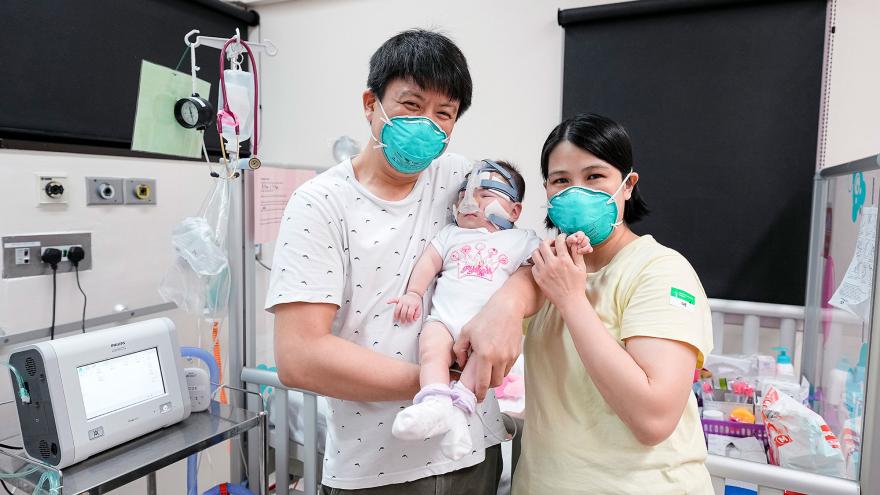 The baby\'s parents thanked staff at the hospital after her discharge. Credit: National University Hospital Singapore
By Rob Picheta, CNN

(CNN) -- A baby born weighing just 212 grams (7.5 ounces) -- about as heavy as a softball or an apple -- has left hospital after more than a year and arrived at her family home.

Kwek Yu Xuan was born almost four months prematurely in Singapore in June 2020, and was considered by doctors to have a limited chance of survival.

But the hospital that housed her for more than a year announced at the weekend that, "against the odds," she had been discharged in July at a far healthier weight of 6.3 kilograms (13.9 pounds).

She is believed to be the lightest baby ever delivered and discharged well to home. A registry managed by the University of Iowa lists a 230-gram (8.1-ounce) child born in Germany in 2016 as the lightest, while the current Guinness World Record is held by a 245-gram (8.6-ounce) American child born in 2018.

Yu Xuan was delivered by an emergency caesarean section at just under 25 weeks of gestation, Singapore's National University Hospital said in a statement sent to CNN on Tuesday.

A full-term baby is born after about 40 weeks, and newborns typically weigh between 6 and 10 pounds.

Yu Xuan spent 13 months in the facility's neonatal intensive care unit, and had to rely on "multiple treatments and machines" for survival, the hospital said. But they added the child was "active, cheerful and responsive" during her stay.

'A ray of hope amid turmoil'

The facility described Yu Xuan as "a ray of hope amid turmoil," given that the entirety of Yu Xuan's extraordinary young life has taken place during the Covid-19 pandemic.

"Against the odds, with health complications present at birth, she has inspired people around her with her perseverance and growth," the hospital said.

"We are happy for the little fighter and her family, and proud of the care provided by our team," the hospital added in a Facebook post."Our best wishes to Little Yu Xuan as she continues to grow, thrive and beat the odds every day."

She returns home with chronic lung disease and pulmonary hypertension, two conditions commonly associated with extreme prematurity, and her doctors expect her to recover in time, the hospital said.

Yu Xuan's parents, Kwek Wee Liang and Wong Mei Ling, thanked the hospital's staff in the statement. They had initially planned to deliver Yu Xuan in Malaysia, where their 4-year-old firstborn lives, but the child's mother was admitted to hospital and delivered the baby after suffering from preeclampsia -- high blood pressure during pregnancy -- at 24 weeks and six days' gestation.

The survival of a child born at under 400 grams (14.1 ounces) is "very uncommon,"according to the University of Iowa's registry. A 2016 study found that despite medical advances, a child born before 28 weeks' gestation and below 1 kilogram in weight has around a 50-70% chance of survival.

"It was a difficult journey for Yu Xuan and we greatly appreciate the concerted effort and benevolent support from our colleagues, donors as well as the larger community who have contributed to her survival and growth," said Zubair Amin, the head and senior consultant at the hospital's Department of Neonatology. "This was a team effort that embodies the spirit of care and compassion."