Wreckage from TWA Flight 800 to be destroyed years after explosion 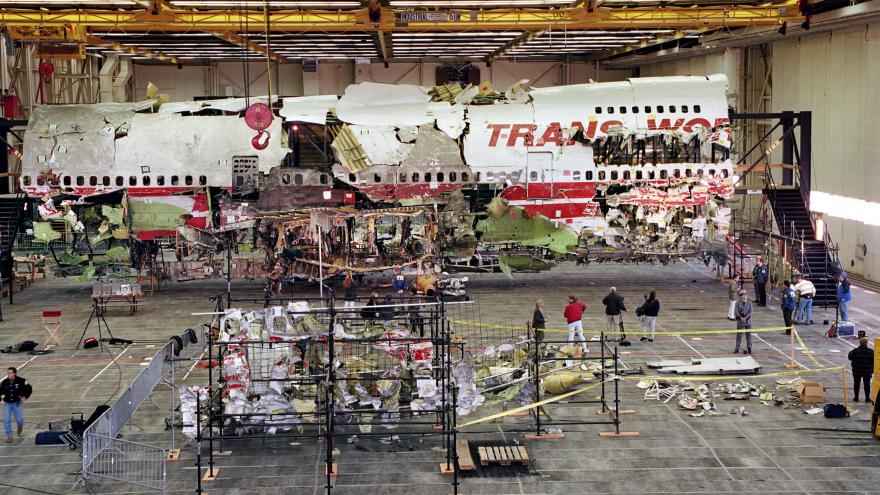 Wreckage of the front portion of the Boeing 747 aircraft is displayed in its reconstructed state on November 19, 1997 in Calverton, Long Island, New York. - JON LEVY/AFP/Getty Images/FILE

(CNN) -- The reconstructed wreckage of Trans World Airlines Flight 800, which exploded minutes after taking off from New York's John F. Kennedy International Airport on July 17, 1996, will be decommissioned and destroyed, according to the National Transportation Safety Board.

All 230 people on board the Paris-bound flight were killed. The Boeing 747 was destroyed, and the wreckage fell into the waters of the Atlantic Ocean off the shores of Long Island, New York.

The reconstructed wreckage has been used in accident investigation training courses for nearly 20 years, the NTSB said in a statement on Monday.

The tragedy prompted one of the largest & most expensive aviation investigations in history and set off a flurry of conspiracy theories, though the NTSB eventually deemed it an accident and found no evidence of foul play.

With help from the Navy as well as contracted fishing trawlers scouring the ocean floor, investigators were able to recover more than 95% of the aircraft. After almost a year, the remains of all 230 who died were also recovered.

As part of the investigation, NTSB reconstructed a 93-foot segment of the aircraft fuselage, which took dozens of people working for months to put the literal pieces back together to help understand what happened to TWA Flight 800.

After an exhaustive four-year investigation, the NTSB determined that the probable cause of the explosion was an electrical short that detonated vapors in the center wing fuel tank, though they never definitively determined where the initial spark came from.

Prior to their findings, law enforcement officials and others suspected that the explosion may not have been accidental. One reason was that some witnesses said they saw something heading toward the plane before it exploded; others said they observed a streak of light and a fireball, raising suspicions that terrorists hit the plane with a rocket. Investigators concluded the streak was likely burning fuel streaming from the plane's wing tank.

After the investigation, the reconstructed plane was moved to a 30,000 square foot hangar at NTSB's training center in Ashburn, Virginia.

However, its days as a training aid will soon be coming to an end as the agency prepares for the training center's lease to expire. With advances in technology -- including 3D scanning and drone imagery -- there is no longer need for such a large-scale reconstruction.

The NTSB said it will stop using the reconstruction on July 7, 2021, just shy of the 25-year anniversary of the crash. After that, the reconstruction will be thoroughly documented over the course of several months using 3D scanning techniques, and the data will be archived for historical purposes before the wreckage is ultimately destroyed.

NTSB said the original agreement with the families of those who died in the crash included a stipulation that the reconstruction would solely be used as a training tool and never as a public exhibit.

"To honor this agreement made with the families of the victims of TWA Flight 800, the NTSB will work closely with a federal government contractor to dismantle the reconstruction and destroy the wreckage," the NTSB statement said.

NTSB Managing Director Sharon Bryson said families have been notified about the decommissioning, and "learned of our decision directly from the NTSB before our public announcement."