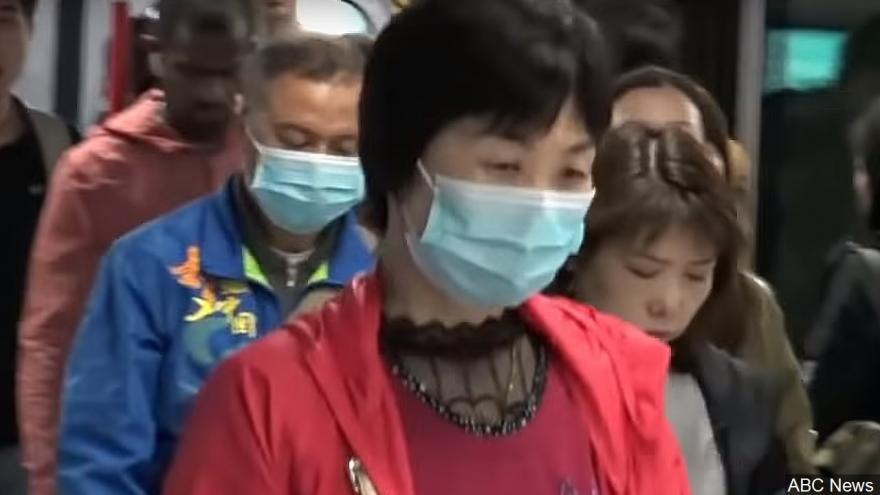 (CNN) -- Authorities in China have enforced a partial lockdown of transport links in and out of the central city of Wuhan and nearby Huanggang, disrupting the Lunar New Year travel plans of millions as part of efforts to contain a deadly coronavirus outbreak.

The lockdowns comeas the Chinese government revealed that seven of the 17 people who have died from the Wuhan coronavirus did not have pre-existing conditions before they contracted the illness.

Wuhan -- ground zero for the pneumonia-like respiratory virus -- "temporarily" closed its airport and railway stations on Thursday for departing passengers. All public transport services in the city of 11 million people have also been suspended until further notice.

On Thursday afternoon, transport authorities began shutting down some of the main highways leaving Wuhan, according to state news agency Xinhua.

The wearing of face masks is now mandatory in all public places in the city, including hotels, restaurants, parks, cafes, and shopping malls.

"People who don't obey the requirements shall be dealt with by authorities in accordance with their respective duties and laws," a statement from Wuhan's municipal government said on Wednesday.

Authorities in Huanggang, about 80 kilometers (50 miles) east of Wuhan, announced a series of similar measures cutting off the city as of midnight local time (11 a.m. ET on Thursday).

Government officials said in a statement that the city's subway and train stations will close, per a report in the People's Daily, a state-run newspaper. All theaters, internet cafes and indoor public culture, tourism and entertainment facilities in the city will also stop business, People's Daily reported.

Hundreds of thousands of people will likely be affected. The entire administrative area of Huanggang has a population of 7.5 million, but People's Daily reported that the lockdown only applies to the urban area, which is only a part of the total population.

There was an unusual flurry of activity around the train stations in Wuhan early Thursday morning, as passengers -- most of them wearing face masks -- scrambled to leave the city before the lockdown began. Families were seen unloading their cars and hurrying to get into lines that already stretched outside the doors.

At Wuhan's Hankou railway station, one of the country's busiest high-speed rail hubs, officials used thermal detectors to scan for potential fevers as dozens of passengers filed through the security screening. Inside, crowds were shoulder to shoulder as they waited for trains out of the city.

The mass exodus was met with anger from many users of the Weibo microblogging platform.

"Wuhan people, get out of Shanghai," one person posted. "Don't sneak in and spread chaos."

Others shared their fears over the virus, and cautionary warnings. "Don't panic and try not to go out," one person said.

Another person posted they had considered fleeing Wuhan. "I was thinking about my parents and children -- if I bring them, where can we escape to?"

The decision to stop trains and planes to and from Wuhan comes shortly before Lunar New Year begins on January 25 amid what is considered the biggest human migration on the planet, with hundreds of millions of people visiting families and traveling in China or throughout Asia.

Wuhan is one of China's most important cities. Located on the confluence of the Yangtze River and its largest tributary, the Han River, it is considered the political and economic capital of central China.

For those remaining in the city, there is a sense of unease. Jan Renders, a 29-year-old PhD student in Wuhan, told CNN that many shops are closing for the Lunar New Year holiday, so people had already been stocking up on supplies. He said he was able to buy enough food for at least a week.

"But of course people aren't sure whether shops will be going back to normal soon," he said.

Another man in Wuhan sent CNN a photo inside a grocery store Thursday morning that showed several empty shelves. The man, who asked not to be identified, said most of the food was sold out.

The Wuhan New-type Coronavirus Pneumonia Command -- a task-force set up to deal with the crisis -- said in a statement that Wuhan has a sufficient supply and reserve of food, medical supplies and commodities.

"There is no need for the general public of the city to panic or hoard in order to prevent unnecessary wastes," the command said.

The scale of the challenge facing authorities tasked with implementing the blockade is immense. By way of comparison, the lockdown is akin to closing down all transport links for a city more than three times the size of Chicago, two days before Christmas.

"The Chinese new year is the most important festival for Chinese. And many of the mobile population, they're coming from rural China to work in Wuhan, and now you ask them not to leave to see their relatives, that is difficult," professor Yuen Kwok-yung, a leading microbiologist, told CNN.

Yuen was part of a group of high-level experts who visited Wuhan earlier this week and recommended on Sunday that the Chinese central government should stop people traveling to and from the city.

"It has to be done," he said. "If you allow people to go out of Wuhan, especially those who may have symptoms, then the exported case numbers will continue to surge, and that is not a good thing for the whole outbreak control."

Chinese health authorities said on Thursday that at least 598 cases of the Wuhan coronavirushad been confirmed. Seventeen people have died since the contagion was first detected in December -- with all of those deaths in Hubei, the central Chinese province of which Wuhan is the capital.

Among the dead are 13 men and four women aged from 48 to 89. The time period from symptoms showing to death is between 10 days and three weeks in most cases, according to government information.

Cases of the virus have now been reported in nearly every Chinese province, with two cases confirmed in Macao, and two suspected cases reported in Hong Kong. The self-governing island of Taiwan has also confirmed a case of the coronavirus.

Beyond China, officials in Washington state said on Tuesday that a man in his 30s is the first confirmed case on US soil. A total of six cases have also been reported in South Korea, Thailand and Japan.

The true extent of the Wuhan coronavirus is unclear, however, and official figures may be an underestimation as mild symptoms and delayed onset mean cases are likely to have been undetected, a team of scientists have said.

Scientists at Imperial College London estimate that around 4,000 people are likely to have been infected in Wuhan city alone as of January 18.

What we know about the virus

Coronaviruses are transmitted by animals and people, and the Wuhan strain has been linked to a market in the city that was selling seafood and live animals, including wild species. The coronavirus that causes SARS was traced to the civet cat, a wild animal considered a delicacy in parts of China that was sold in similar markets.

Chinese health officials said human-to-human transmission of the virus has been confirmed, raising the chance of its spread. In one instance, 14 doctors and nurses operating on a patient unknown to be carrying the virus were all infected with it, suggesting it can be spread relatively easily.

The disease is mainly transmitted "through the respiratory tract," Li Bin, China's national health commissioner said on Wednesday, adding that "there is possibility of viral mutation and further spread of the disease."

Li said that Wuhan and Hubei provincial authorities should tighten the regulation of farm markets and wild animals. He also urged the public to avoid crowds and minimize large gatherings.

China on Tuesday announced it was adopting Class A prevention and control measures, typically used for major outbreaks such as plague and cholera. The designation has given health officials sweeping powers to lock down affected areas and quarantine patients.

China previously used such measures in 2009 to tackle an outbreak of H1N1, introducing mandatory quarantine for anyone who had "close contact" with an infected person, including foreigners arriving in the country from areas where H1N1 outbreaks had been reported.

As officials race to slow the spread of the Wuhan coronavirus, containment efforts are being put in place in many travel hubs.

Airports around the world are increasing health screenings and implementing new quarantine procedures, including in major airports in the US, Thailand, Singapore and Australia.

Hong Kong's Mass Transit Railway (MTR) has halted the sale of high-speed railway tickets to and from Wuhan, according to its public relations manager Dobie Yam.

Several countries, including the UK and Japan, have advised against all but essential travel to Wuhan.

However, the World Health Organization (WHO) has not yet declared the virus a "public health emergency of international concern," which might merit a coordinated global response.

The organization's emergency committee met Wednesday in Geneva, but decided more information was needed to declare the status of the outbreak and what recommendations should be made regarding it. It is expected to take up the matter again on Thursday.

Meanwhile, a senior State Department official said Wednesday the United States is concerned about transparency inside the Chinese government on the Wuhan coronavirus.

"I do believe that the concern you see both inside China and internationally is a reflection of what we've seen in the past. 2003 was SARS, and a number of issues, where the government has been slow to respond out of fear of embarrassment or making things look worse than they are. And that reluctance to respond in a rapid manner doesn't give the global community a secure feeling for this being managed inside China," the official said.