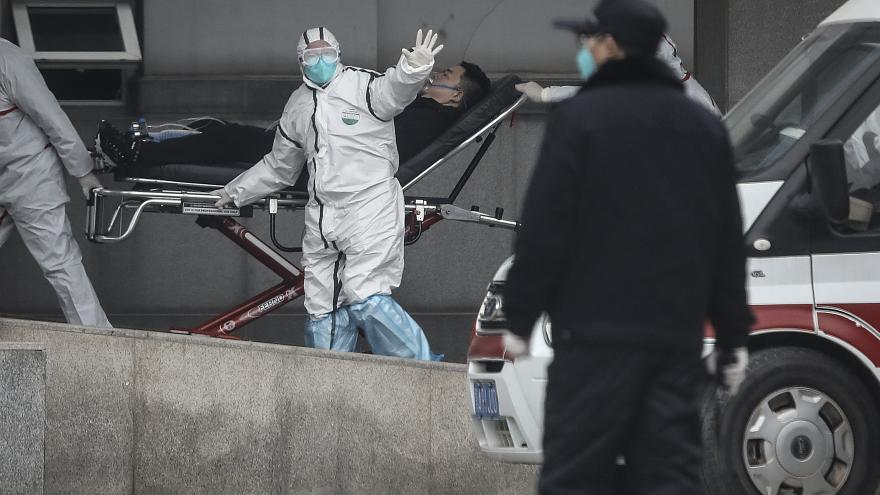 (CNN) -- The death toll from the Wuhan coronavirus has risen to 17, as dozens more cases were reported across China and as far afield as the western United States, sparking fears of a possible pandemic.

On Wednesday, the Chinese city of Wuhan -- where the virus was first identified -- said it would "temporarily" close its airport and railway stations for departing passengers. All public transport services will also be suspended, as authorities attempt to contain the virus.

The city lockdown begins at 10 am local time Thursday (9 pm ET Wednesday), according to an announcement from the city's coronavirus command center.

Chinese health authorities said that at least 547cases had been confirmed in the mainland, with eight new deaths linked to the virus in Hubei, the central Chinese province of which Wuhan is the capital. Cases were also confirmed in the Chinese territory of Macao and the self-governing island of Taiwan.

Beyond China, officials in Washington state on Tuesday confirmed the first case on US soil. The patient is a male in his 30s who is under observation at Providence Regional Medical Center Everett, said John Wiesman, Washington's secretary of health, at a press conference Wednesday.

Health officials have reviewed the travel history of the patient, said Dr. Chris Spitters, Snohomish Health District acting health officer on the patient's contact investigation. "As of now, there are at least 16 identified close contacts," Spitters said. "Local health departments started reaching out to them yesterday and continued doing so today."

Spitters said "the risk to the general public remains low and the public health system and our health care partners are working swiftly and collaboratively to address this situation."

Cases have also been reported in South Korea, Thailand and Japan, and suspected cases detected in Australia.

Worldwide, a total of 555 cases have been confirmed since the outbreak was detected in mid-December.

However, the World Health Organization (WHO) has not yet declared the virus a "public health emergency of international concern," which might merit a coordinated global response.

The organization's emergency committee met Wednesday in Geneva, but decided more information was needed to declare the status of the outbreak and what recommendations should be made regarding it. It is expected to take up the matter again on Thursday.

China on Tuesday announced it was adopting Class A prevention and control measures, typically used for major outbreaks such as plague and cholera. This means health officials will get sweeping powers to lock down affected areas and quarantine patients. China previously used such measures in 2009 to tackle an outbreak of H1N1, introducing mandatory quarantine for anyone who had "close contact" with an infected person, including foreigners arriving in the country from areas where H1N1 outbreaks had been reported.

Li Bin, China's national health commissioner, said that officials are aware of around 2,200 cases of "close contact" with known virus carriers. Regarding suspected cases, 715 patients have been discharged while more than 300 patients remain on medical watch.

The disease is mainly transmitted "through the respiratory tract," said Li, adding that "there is possibility of viral mutation and further spread of the disease."

While there are indications that Chinese authorities are ready to ramp up controls on travel -- including ordering that all trips to Wuhan be canceled and refunded -- it remains to be seen whether the virus, already reported in around a dozen locations, can be reined in before the Lunar New Year travel period truly kicks in.

The largest annual human migration on Earth, hundreds of millions of people will travel across China and overseas during the four-week period, which began in mid-January and continues until February. Many will go by train or plane, raising the risk of infection as they are put in close contact with other travelers.

What we know about the virus

Coronaviruses are transmitted by animals and people, and the Wuhan strain has been linked to a market in the city which was selling seafood and live animals, including wild species. SARS was previously linked to similar markets, particularly the sale of civet cats, a delicacy in some parts of China.

Speaking Wednesday, Li, the Chinese health official, said that Wuhan and Hubei provincial authorities should tighten the regulation of farm markets and wild animals. He also urged the public to avoid crowds and minimize large gatherings.

Chinese health officials said human-to-human transmission of the virus has been confirmed, raising the chance of its spread. In one instance, 14 doctors and nurses operating on a patient unknown to be carrying the virus were all infected with it, suggesting it can be spread relatively easily.

People were seen at a train station Wednesday trying to get train tickets to leave Wuhan.

The true extent of the virus is unclear, and official figures may be an underestimation. A study by British researchers previously estimated -- based on the spread of the virus overseas in a relatively short time -- that the number of people infected in Wuhan alone was likely around 1,700.

However, so far the death toll is relatively low, and almost all cases involved elderly people with preexisting conditions: of the more than 400 confirmed cases in China, nine deaths have been reported so far, or 2.25%. By comparison, SARS had a mortality rate of around 10%, and was even more deadly among vulnerable populations.

With cases and suspected cases already reported across Asia and now as far afield as the US and Australia, containment efforts are being put in place in many travel hubs.

Wuhan alone has connections with more than 60 overseas destinations through its international airport, while Beijing, Shanghai and Shenzhen, all of which have reported cases, have hundreds more.

Airports across Asia have stepped up temperature screening of incoming passengers, as have several hubs in the US, including New York, San Francisco and Los Angeles.

Officials at Seattle-Tacoma International Airport put up signs at the international arrivals area instructing travelers from Wuhan to watch for symptoms of the virus. The Centers for Disease Control and Prevention started displaying the sign in English and Chinese on January 14, an airport spokesman said.

The International Air Transport Association (IATA) issued a statement saying it was closely monitoring developments and is actively working with the WHO secretariat, the International Civil Aviation Organization and the CDC.

With all indications that the virus has a relatively slow incubation time, however, these efforts may be insufficient to stop its spread.

"You cannot absolutely prevent entry into the country of a disease like this. The incubation period is probably a week," Australia's chief medical officer, Brendan Murphy, said Tuesday. "It's about identifying those with a high risk and making sure people with a high risk know about it and know how to get medical attention."

Raising concerns about how difficult it is to detect those with the virus, even if they have some symptoms, a patient in South Korea told doctors there she had developed a fever and muscle pains on Saturday and was prescribed cold medicine by a doctor in Wuhan, before being sent on her way. She was later confirmed to have the coronavirus during a check in Seoul.

In the US, the National Institutes of Health is working on a vaccine for the new virus, though it will take at least a few months until the first phase of clinical trials get underway and more than a year until a vaccine might be available.

Scientists in Texas, New York and China are also at work on a vaccine, according to Peter Hotez, a vaccine scientist at Baylor College of Medicine in Houston.

"The lesson we've learned is coronavirus infections are serious and one of the newest and biggest global health threats," Hotez told CNN.