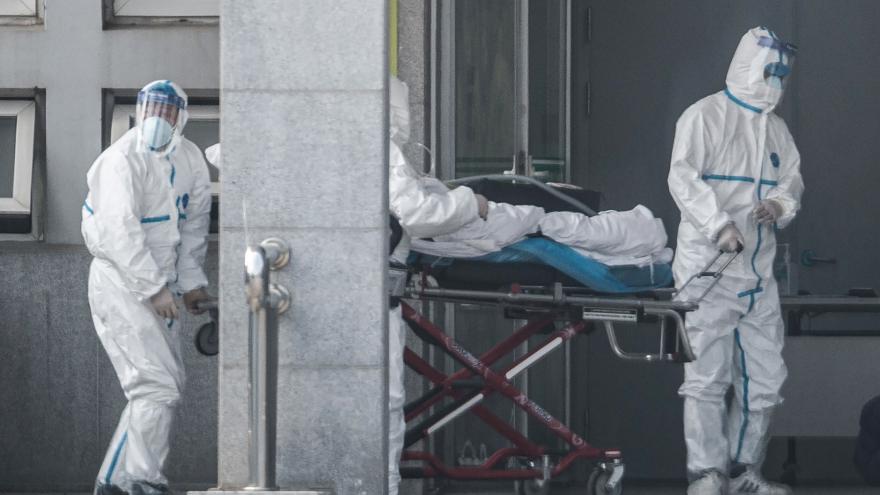 (CNN) -- Healthcare workers in the Chinese city of Wuhan said Saturday that hospitals are running low on supplies as they struggle to cope with the outbreak of the deadly Wuhan coronavirus.

It comes as the Chinese central government announced on Saturday it would send more than 1,200 health workers — as well as 135 People's Liberation Army medical personnel -- to the city in an unprecedented effort to contain the spread of the virus.

Forty-one people have now been killed by the Wuhan coronavirus, with some 1,400 confirmed cases worldwide -- the majority of which are in China.

The outbreak in China has cast a pall over Lunar New Year celebrations -- the country's most important holiday -- with festivities canceled in Beijing, Hong Kong and other major cities.

There are also concerns about the global spread of thevirus as more countries, including Australia, Nepal and Malaysia, reported their first cases. They are among 13 places outside mainland China where the virus has been confirmed.

In Wuhan, ground zero for the virus, four healthcare workers -- including doctors -- have told CNN of the difficulties facing medical crews on the ground. They have asked to remain anonymous to avoid repercussions.

Through telephone conversations with CNN and posts on Chinese social media, they told of low hospital resources. In private groups online, those identified as hospital staff are coordinating with members of the public to import protective equipment as they treat an increasing number of infected patients.

"In terms of resources, the whole of Wuhan is lacking," one Wuhan-based healthcare worker told CNN by phone. This person said they were looking for more protective clothing, protective goggles and masks.

One hospital staff member claims healthcare workers have resorted to wearing diapers to work so as to avoid having to remove their HAZMAT suits, which they say are in short supply. A doctor on her Chinese social media Weibo page described similar accounts at another Wuhan hospital.

"My family members are definitely worried about me, but I still have to work," another doctor told. But she said that she is hopeful they will ultimately get the gear they need. "Our bosses, our hospital suppliers will definitely find a way to get these stocks to us," she added.

It's not clear if these accounts are anecdotal or whether there are widespread shortages across Wuhan.

Chinese state media has also shared posts from multiple Wuhan hospitals in which they ask for public donations of medical supplies. They report that one hospital staff member said the current supplies "are only able to sustain three or four days".

The Wuhan Health Commission has requisitioned over 10,000 beds from 24 hospitals to be used in the treatment of confirmed and suspected cases.

On Friday, Wuhan officials acknowledged that local hospitals were struggling to accommodate people seeking medical attention and said measures were being put into place to alleviate the situation.

State media also reported that the city aims to build a 25,000 square meter (269,100 square foot) new facility within a week, increasing hospital capacity by 1,000 beds, and that several medical centers in Hubei province are asking for medical gear donations.

Locking down the virus over Lunar New Year

More than 57 million people across 15 Chinese cities are under partial lockdown, with authorities imposing indefinite restrictions on public transport and travel.

All motor vehicles will be banned in Wuhan's city center starting Sunday to control the flow of people, according to the Wuhan Command Center, the taskforce set up to combat the virus. Only vehicles with special permits, free shuttles and government vehicles will be allowed to circulate.

Amid the lockdown, countries like the US and France have been attempting to evacuate their citizens from the central Chinese city.

The US government is arranging a charter flight to evacuate American diplomats and citizens from Wuhan, a US official with knowledge of the matter told CNN.

The French government says it's planning to set up a bus service to move French nationals out of Wuhan.

Meanwhile, 56 Indian students have been trapped in Wuhan for three days, with some afraid to leave their dorm room and fearful of running out of food.

Ganesan Deepshikha, a student at the Wuhan University School Of Medicine, told CNN that the students have been told by the Indian Embassy that they are safe in Wuhan but have not received any assistance.

The virus, which was first discovered in Wuhan in December, has spread to every province in China, except the remote autonomous region of Tibet.

Among those infected is a 2-year-old girl in the southern region of Guangxi, the local health authority said. She is believed to be the youngest patient infected.

The week-long Lunar New Year holiday, which began Saturday, has led to concerns that the outbreak could quickly accelerate, as hundreds of millions of people travel across the country to visit friends and relatives.

Lunar New Year is to China what the Christmas-New Year holiday period is to the United States -- except China's 1.4 billion population is more than four times that of the US.

In many cities, festivities have been called off. Authorities in Beijing have canceled all large-scale Lunar New Year celebrations, including traditional fairs and celebrations around temples.

Shanghai Disneyland has temporarily closed its doors. Seven blockbuster movies that were set to hit theaters this weekend have been canceled or postponed.

Businesses are also taking measures to protect staff and the public.

On Saturday, coffee giant Starbucks said it has closed all 90 of its Hubei stores indefinitely. The closures will continue throughout the Spring Festival, which runs until the end of January.

"All Starbucks stores and special star delivery in Hubei will be temporarily closed. Hubei employees are asked to rest at home, minimize going out, take care to protect themselves and their families. All store employees who were scheduled to work during the closing period will be paid as usual," a statement from the company said.

On Thursday, the World Health Organization (WHO) moved to declare the coronavirus an emergency within China -- but refrained from classifying the outbreak as an epidemic of international concern.

Mounting evidence suggests the virus is spreading outside mainland China, however, with 13 countries and territories reporting confirmed cases, including the United States and France.

On Saturday, Australia confirmed that three men who traveled from China to Sydney had tested positive, health authorities in the city said. The country has now confirmed a total of four cases.

Nepal also confirmed its first case, a spokesman for the country's Health Ministry told CNN. The patient is a 31-year-old Nepali man studying for his PhD in Wuhan, spokesman Mahendra Kumar Shrestha said. The student flew to Nepal earlier this month and was admitted to a hospital in Kathmandu on January 13 with fever and respiratory problems.

Hong Kong leader Carrie Lam announced on Saturday that the Hong Kong Disease contingency plan has been upgraded from "serious" to "emergency" level. Schools in the Chinese territory will be suspended until February 17.

On Thursday, David Heymann, the chairman of a WHO committee gathering data on the outbreak, said the virus spreads more easily from person to person than previously thought. "We are now seeing second and third generation spread," Heymann said.

Coronaviruses are transmitted by animals and people, and the Wuhan strain has been linked to a market in the city that was selling seafood and live animals, including wild species.

Third generation means that someone who became infected after handling animals at the market spreads the virus to someone else, who then spreads it to a third person. The announcement marks a development in the progress of the spread of the virus.

Heymann said there is no evidence at this point that the virus is airborne and could be spread across a room, as happens with the flu or measles.