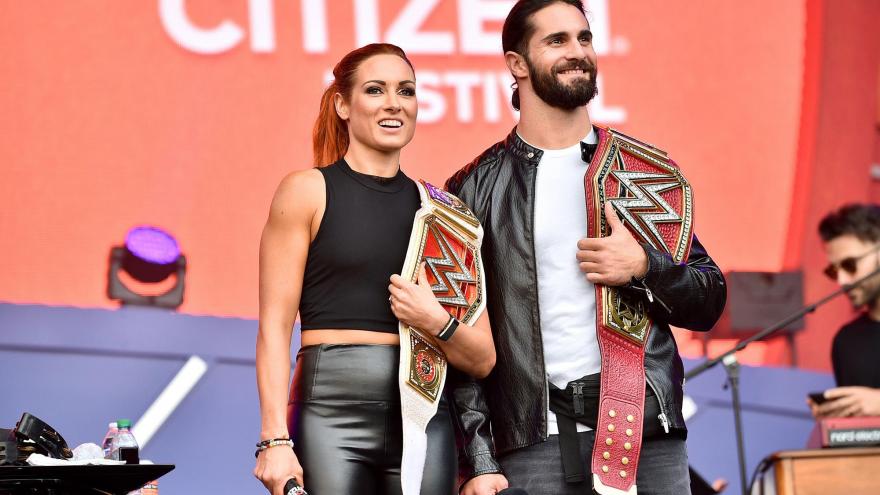 Becky Lynch and Seth Rollins. Lynch announced she is pregnant and relinquishing her title.

Lynch, whose real name is Rebecca Quin, is the longest-reigning Raw Women's Champion in WWE's history. On Monday, she made an emotional announcement during Raw, a weekly wrestling show, that she was relinquishing her title and stepping away from the ring.

"You go and be a warrior, because I'm going to go be a mother," Lynch told Asuka, who became the new champion.

The 33-year-old wrestler teased fans on Sunday that she was going to making a statement about her absence from the ring.

Lynch is engaged to fellow wrestler, Seth Rollins, and this will be the first baby for the couple. Speaking exclusively to People magazine, Lynch confirmed that their new addition to their family is due in December.

"I've always, always wanted kids," Lynch told People. "I'm just so career-focused that it became one of those things that, when you're chasing a dream for so long, I always wondered, 'Am I going to get around to it? Is it going to happen for me?' "

The Irish wrestler started her career at WWE in 2013 and quickly rose up the ranks. She won both the Raw and SmackDown Women's Championship titles last year when she defeated Ronda Rousey and Charlotte Flair in the first ever women's match to headline WrestleMania, WWE's biggest event of the year.

"I have no idea what happens from here, but I do know that you've made all my dreams come true," she tweeted Monday night. "I entered the PC in 2013 not knowing anyone, I'll leave that same building tonight with my new family. Thank you all so much."

The couple first went public with their relationship last May and announced their engagement in August. They were set to marry this month but due to the pandemic those plans are on hold, Lynch told People.

"We'll get around to that," said Lynch. "There's no rush, and now we'll have a little flower girl or a page boy."