WWII destroyer remains found off the coast of Alaska 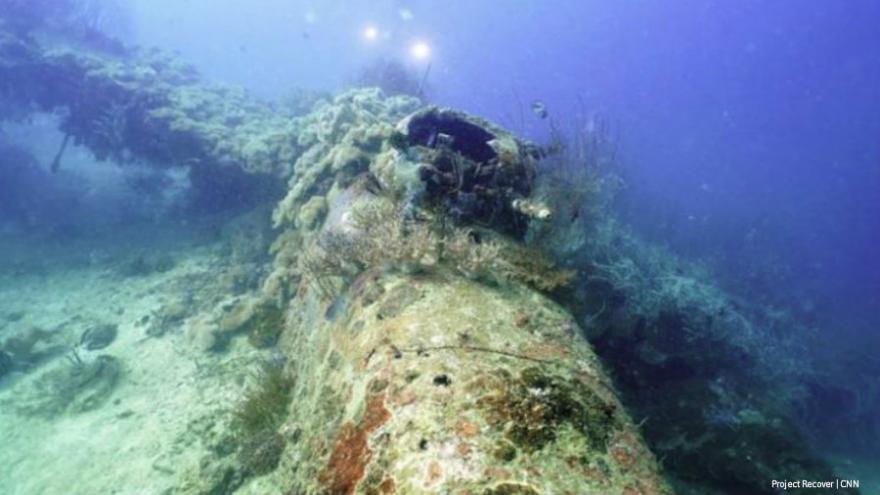 (CNN) -- After 75 years, researchers have discovered the stern of a World War II destroyer off the coast of Alaska and presumably, the final resting place of 70 crew members who were never found after the vessel was hit by a Japanese mine.

Project Recover, a team funded by the National Oceanic and Atmospheric Administration, first found the remains of the USS Abner Read in July, according to a statement Wednesday on its website.

The general area has been known for years, but researchers focused on finding the stern this year. In July, sonar found a potential site and the team sent an unmanned vehicle down for a look.

The stern, 75 feet long and about 18 feet high, was encrusted with sea life but it was unmistakable. The search team also saw a gun and rudder control.

"We've entered a new age of exploration," Mark Moline, director of the School of Marine Science and Policy at the University of Delaware and co-founder of Project Recover, said this week, according to a news release. "New sensors and improved underwater robots that can bring back real-time images are driving new discoveries."

More than 300 men were aboard the Abner Read as it sailed near an island of the US territory of Alaska 75 years ago, hunting for Japanese submarines.

About 1:50 a.m. on August 18, 1943, a huge explosion separated the stern from the ship and more than 90 sailors went into the water. About 20 were rescued, one body was pulled from the Bering Sea, but 70 men were never found.

Daryl Weathers, a ship fitter on the Abner Read, said Wednesday he was surprised by the news they had found the World War II ship's sheared stern.

"That's the end of the world up there," he said from his home in Seal Beach, near Los Angeles.

Weathers, 94, said the crew tried to save their shipmates but oil had spilled into the cold water and it was tough to pull people out.

"They were slippery and you couldn't keep ahold of them," he said. The crew put a boat in the water and threw floatation gear for the men but the conditions prevented many from being rescued.

The stern and the remains will stay where they are. It is hallowed ground, explained Paul Taylor of the Naval History and Heritage Command.

"The Navy has a longstanding tradition that sites like these are a fit and final resting place for those who perished at sea," he said. "It's a war grave and we treat it as such."

The men are listed among the more than 72,000 Americans missing after the war, online records show.

The crew of the Abner Read was able to save the ship and it was towed back to port by the USS Bancroft, another destroyer. The Abner Read then sailed to Bremerton, Washington, where it was repaired and in two months was back in the war in the Pacific. It was sunk in November 1944 by a Japanese dive bomber.

Weathers vividly recalled being on radar watch the night the explosion happened near Kiska Island, which the Japanese had just evacuated.

The Abner Read was doing figure-eights in the water, looking for submarines.

Many of the men were relaxed because the surveillance came as the Aleutian Islands Campaign, which included the only battles on North American soil during World War II, was winding down after some brutal fighting.

The ship had been in the area for two days without any concerns. The water was smooth and the moon was peeking through clouds.

Weathers said the crew at first thought they had been hit by a torpedo and were waiting for another attack.

Weathers said he was lucky to be on duty because the mine hit near where he would have been sleeping.

"I probably wouldn't have made it," he said.

He barely made it through the Abner Read's final battle, during which he was manning a gun that fired on the incoming dive bomber. They shot off a wing, but the plane kept coming, slamming into the ship just above his gun tub.

"I was hurt pretty bad," he said, adding he was knocked out for a few minutes. When he came to, everything was on fire -- including him. "I thought, I better get out of here" and started running, he said.

A comrade gave him shots of morphine and a friend supplied him with a life jacket.

Weathers spent the next seven months in a stateside hospital, then a few months on another ship until the war ended.

He said the crew used to have reunions until about six or seven years ago when health issues prevented survivors from attending. Now he thinks he is the probably the only one left.

He was surprised people were still looking for the Abner Read's stern and he was told the occasion of the incident will be marked this weekend.

Taylor said the explorers gathered a lot of data from their examinations of the stern.

It will take some time to see what the information reveals, he said.