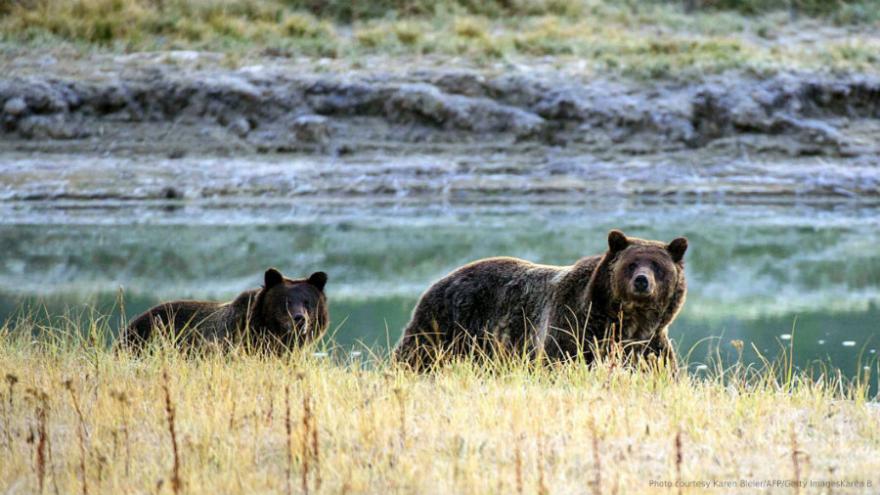 (CNN) -- Grizzly bears in Wyoming and Idaho have been granted at least 14 more days of protection after a federal judge blocked the first grizzy trophy hunt in decades.

US District Judge Dana Christensen granted a temporary restraining order Thursday to halt the open licensed hunt of Yellowstone grizzly bears, which would have allowed hunters to kill as many as 23 bears for sport.

Christensen said "the threat of death to individual bears posed by the scheduled hunts is sufficient" to delay the hunting season that would have begun this weekend in both states.

However, in 2017, the US Fish and Wildlife Service removed the Yellowstone grizzly bears from the endangered species list, claiming the bear's population had grown to 700.

As a result, Wyoming and Idaho approved plans to allow hunters, with a permit, to kill the bears this fall for the first time in more than 40 years.

More than 7,000 people applied for a permit to hunt the animal in Wyoming, and after the judge's ruling the Wyoming Game & Fish Department began notifying the hunters of the suspension.

"This is unfortunate. Game and Fish has a robust grizzly bear management program with strong regulations, protections and population monitoring for grizzly bears. We believe in state-led management of wildlife and involving the public in decisions like the creation and implementation of a conservative hunting opportunity for those who want that experience," Scott Talbott, director of the Wyoming Game and Fish Department, said in a statement sent to CNN.

The hunting season for the bears was supposed start this Saturday and last until November 15. They also have another season scheduled to start September 15.

"We will now await further information about whether the bears will remain under state management or if they go back to federal management," said Talbott.

The ruling marks a victory for environmentalists and Native Americans,who filed several lawsuits over the US Fish and Wildlife Service 2017 decision, and the claims were all placed into one case that Christensen got to hear on Thursday.

More than 17,700 comments were submitted to the National Parks Conservation Association expressing concern for the grizzlies, the group said, and more than 8,000 people asked the US Fish and Wildlife Service to withdraw its decision to delist the bears.

Supporters of the grizzlies include renowned wildlife photographers who applied for some of the hunting permits -- and won at least one -- with the intention of not using them, under a campaign they call "Shoot 'Em With a Camera."