'You brought a huge smile to my face,' Prince Harry tells 95-year-old who walked for charity 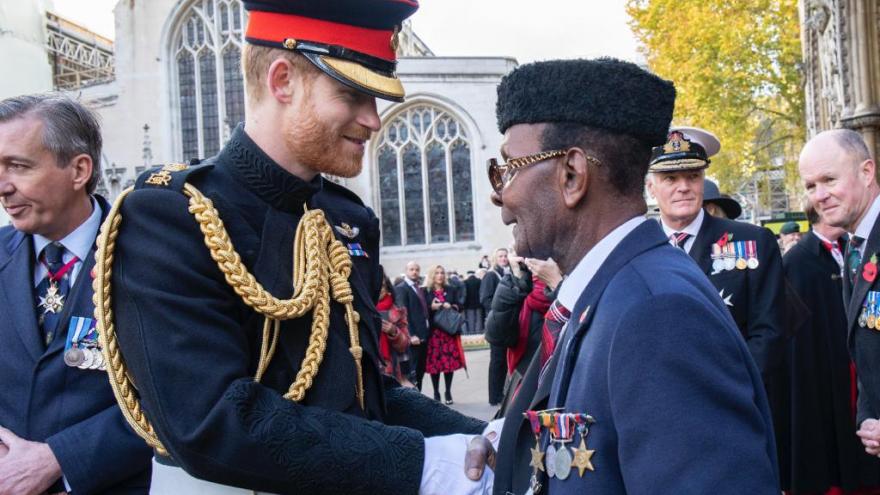 Courtesy: Derrick Cobbinah
(CNN) -- Private Joseph Hammond, the 95-year-old Ghanaian man who walked 14 miles to raise money for frontline workers in Africa "brought a huge smile" to Prince Harry's face, he said in a letter to the war veteran.

Prince Harry applauded the veteran for taking up the strenuous task for a good cause.

"Even at '95 years young' I imagine it was not an easy task," he wrote in the letter to Hammond and which was seen by CNN.

"However, given the service and selflessness you have demonstrated throughout your life, it does not surprise me that you would take on a challenge such as this -- and that you wanted to walk even more miles. As you said yourself, it is amazing!"

Inspired by the UK's Colonel Tom Moore, a fellow veteran whose walk raised more than $40 million (£32.7 million) for the country's National Health Service (NHS), Private Hammond set out to do the same for healthcare workers across the African continent.

"He's a veteran and I am a veteran. I sat quietly and thought over ... his achievements and thought why not, if he has done it in Britain, at 95 years old, I can do it myself," he told CNN at the time.

Both Hammond and Moore fought in Myanmar, then known as Burma in World War II. Hammond says he served as a mechanic in the army where he was attached to the 3rd Gold Coast regiment as an infantryman, fighting alongside the British army.

Prince Harry praised both veterans whose achievements, he said had set a "fine example to the world" on the importance of service to one's community.

Last year, during a celebration for Commonwealth soldiers in the UK, Hammond met with the Queen and members of the Royal Family, including Prince Harry whom he took a liking to. "This man especially, Prince Harry, I glued myself to him because he is also a soldier, he's been to Afghanistan, and we spoke about the military, my battalion. We exchanged ideas. It was wonderful," he told CNN.

Recalling the meeting, Prince Harry said in his letter that it was "an honor and a pleasure" to meet with the veteran.  "It was an honour and a pleasure to meet you at the Field of Remembrance in London last year, and Meghan and I send you our warmest wishes," he added.