'You can't be what you can't see': Female politicians of color discuss what Harris' win means to them 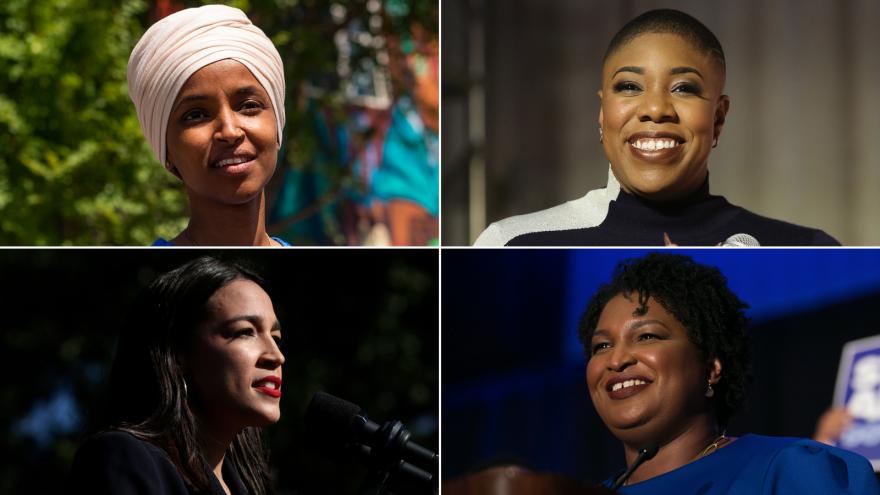 Getty Images-Female politicians of color across the U.S. rejoiced at the ascension of Kamala Harris as the first female, first Black and first South Asian vice president-elect.

(CNN) -- The ascension of Kamala Harris as the first female, first Black and first South Asian vice president-elect is both symbolic and important to many women across the United States, and several female politicians of color expressed on CNN Sunday morning what it meant to them.

"It is a privilege in this nation to be able to see yourself reflected in the face of leadership and for both the African-American community and the Indian American community and for women of color at large," former Georgia gubernatorial candidate and Democratic organizer Stacey Abrams told CNN's Jake Tapper on "State of the Union."

"Kamala Harris' election signals that the face of leadership does change, that we do have a role to play beyond being supporters and advocates and adjutants that we can be the leaders of this country and I think it is an exceptional moment that we are experiencing in this country," Abrams continued.

Symone Sanders, a senior adviser to President-elect Joe Biden, told Tapper, "I think folks in Wilmington and folks all over the world saw the true possibilities of America."

And Democratic Rep. Alexandria Ocasio-Cortez of New York called Harris' victory "really incredible" in an interview on the same program.

"For so many of us, especially women, we have grown up -- I know my entire childhood, we grew up being told women are too emotional and that this country would never elect, first, a Black president -- and luckily that happened with the election of Barack Obama -- but now a woman of color and no less a Black woman to the second highest seat in the land."

"It's really remarkable and you can't be what you can't see. That is very often said and it's so amazing that so many little girls are growing up with this being a norm for them," Ocasio-Cortez emphasized.

When she addressed the nation Saturday night, Harris declared, "While I may be the first woman in this office. I will not be the last. Because every little girl watching tonight sees that this is a country of possibilities."

That message resonated with many, including Democratic Rep. Ilhan Omar of Minnesota, who was watching Harris' remarks with her 8-year-old daughter.

"And the first thing Ilwad said to me was, 'This is someone who looks like me, Mama,' " Omar told CNN's John King on "Inside Politics." "We can't lose sight of the fact representation is powerful, that she has now allowed so many little girls, not just in our country but around the world, to see themselves as somebody who can ascend to one of the highest offices in our nation and as she said, that anything can be possible if you're willing to work for it."

It was a significance that Harris herself acknowledge on Saturday night.

"Dream with ambition, lead with conviction, and see yourselves in a way that others may not see you, simply because they've never seen it before," she said.