Your favorite comfort foods are getting more expensive 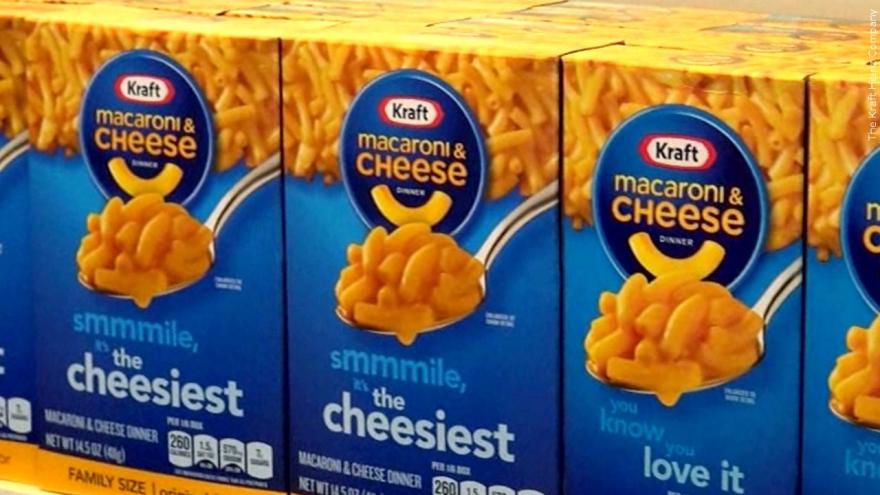 (CNN) -- Get ready to pay even more for the fun stuff in your grocery cart.

Top snack makers Kraft Heinz and Mondelez say they will hike prices for retail customers on varieties of Kraft Mac & Cheese, Jell-O, Bagel Bites, Cool Whip, Toblerone, Sour Patch Kids and other items beginning next year. If these companies' customers — which include big box stores, supermarkets, drug stores and others — decide to pass on those increases, they'll soon be biting into shoppers' wallets, just like higher prices for pork, beef and other items.

"Retailers may want to absorb some of the price increase to remain competitive," said Neil Saunders, the managing director of GlobalData Retail. But "a lot of them will not, because they've got their own cost increases," he noted. "Quite a lot of [the increased pricing] will probably be passed through to the consumer."

Like most US companies, food and consumer product manufacturers are facing higher costs for labor, raw materials, transportation and other expenses. Many have responded in recent months by raising prices, cutting production of fringe items, and capping the amount of products retail customers can purchase. And they're seeing that, so far, consumers are willing to pay up.

The pandemic has led to higher demand for snacks and sweets as shoppers spend more time at home and sometimes stress eat. But snack and candy prices have lagged behind climbing food prices overall. In September, grocery prices increased 4.5% from the same month last year, according to the latest data from the Bureau of Labor Statistics. Snack prices ticked up 1.9% in September, while candy and chewing gum prices increased 2%.

Now, even higher prices on comfort foods are likely to come as companies attempt to combat lingering cost pressures.

One regional distributor to grocery stores received a letter from Kraft Heinz dated November 1 notifying the company that it will raise prices effective January 9 on hundreds of items. The products include varieties of Jell-O gelatin and pudding, which will go up by about 7% to 16%; Bagel Bites frozen snacks, which will increase roughly 10%; and Cool Whip topping varieties, slated to jump by about 7% to 10%.

Dozens of Kraft Mac & Cheese versions will see price hikes, from a 3.5% increase on a pack of EZ Mac to 20% for a 7.25-ounce dish of Kraft Big Bowl Mac & Cheese. The distributor shared the letter on the condition of anonymity to protect the company's relationship with suppliers.

Strong demand, supply constraints and uncertainty increased input costs for Kraft, the company said in the letter, adding that the "upward trend in packaging, transportation, ingredients and labor costs persists, reaching levels not seen in decades." Those higher costs led to the company's decision to raise prices.

In an email to CNN Business, a spokesperson for Kraft did not say whether price increases applied to all of Kraft's customers. But the company has increased prices by an average of 5% on 80% of its products "to help offset the escalating inflation that the entire industry is facing," the spokesperson said. At the same time, Kraft is also introducing more affordable price points and value sizes on brands such as Lunchables, Mio and Kraft Mac & Cheese.

'An ongoing desire for comfort'

Meanwhile, at Mondelez, which makes Oreos and Chips Ahoy in addition to candy, "we've been increasing prices, and we plan to increase prices more than we've done ... probably for quite a while as a company," said CEO Dirk Van de Put during a Tuesday analyst call discussing the company's third-quarter results.

According to Mondelez, a 6% to 7% price increase will take effect in the US in January of 2022.

The company provided specifics on some products that will be impacted in a November 1 letter emailed to the grocery distributor, which was seen by CNN Business. The letter states that starting in January, several varieties of Toblerone bars would get about 7% more expensive. The price of 9-10 ounce Sour Patch Kids bags will jump 5.9%, as well.

Demand for Mondelez's products has been strong. Consumers "have an ongoing desire for comfort," Van de Put said on the earnings call.

And that demand doesn't appear to be waning as prices go up, Van de Put noted, saying that consumers have nearly no elasticity at the moment — meaning that their spending habits aren't changing as prices do.

Shoppers do indeed appear to be accepting higher comfort food prices, for now. McDonald's expects its menu prices to be about 6% higher in 2021 compared to 2020, CEO Chris Kempczinski said during a recent analyst call. The increase "has been pretty well received by customers" so far, he noted. Chipotle has also been able to raise prices without being punished by customers.

Consumers may be willing to spend more to get the snacks they love, noted GlobaData's Saunders. People who love Oreos, for example, "probably don't want to downgrade to what they see as a subpar alternative." But companies still have to be careful when hiking prices, because at a certain threshold, even loyal customers may end up buying less rather than switching brands, he said.