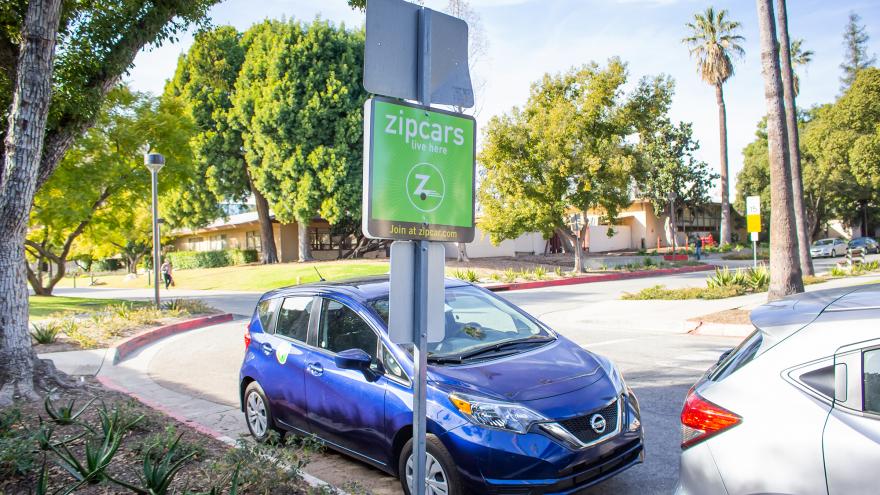 (CNN) -- Dennis Plucinik had finished filling up his Zipcar at a New York gas station the night of July 5 when his holiday weekend unraveled.

Far from home, with his daughter and girlfriend looking on, Plucinik said he tried in vain to get the SUV to start. Then it started honking. People started shooting him odd looks.

Plucinik said he tried calling Zipcar customer support. No answer. He says he tried Zipcar on email and Instagram. No response, he said.

After 90 minutes on hold with Zipcar customer service, Plucinik said he gave up and called his ex-wife. She drove with her boyfriend to pick them up. Everyone arrived home at about 2 a.m., according to Plucinik.

CNN Business reached out to dozens of people like Plucinik who had mentioned the car-sharing service on social media platforms this year, and spoke with 16 customers, most of whom were satisfied until recently. They said that the car-sharing service's quality had deteriorated in recent months, and that some cars are especially dirty, or not even available when members arrive for reserved rentals, a trend they say has worsened since the pandemic. Zipcar apologized for the shortcomings in a statement to CNN Business and said it's taking steps to improve the service.

Some customers have had to scramble to get alternative transportation and were left in what they felt were unsafe situations, such as being stranded far from home without a way to get around.

And when things go wrong, customers interviewed by CNN Business say they rarely can get in touch with Zipcar customer support, even after waiting hours on the phone. Some longtime customers who once viewed Zipcar as so reliable and efficient that it could be a stand-in for owning a car, now say they want to cancel their membership, but haven't been able to because they find Zipcar is so hard to reach. Zipcar says users can request to cancel their memberships online, but customers told CNN Business they were unable to do so on the website, and had to call Zipcar's customer support line.

Zipcar was founded in 2000 and quickly found a niche as a car ownership alternative in cities and on college campuses. The rental car company Avis Budget Group bought Zipcar for $500 million in 2013, and Zipcar has since faced stiff competition from Uber and Lyft. Avis has said its businesses were off to a record start to 2020 before the Covid-19 pandemic decimated the rental car industry and triggered the bankruptcy of its rival Hertz. Avis laid off or furloughed approximately 70% of its workforce, and sold off 35,000 vehicles in its fleet.

Zipcar president Tracey Zhen emailed customers Saturday afternoon and said Zipcar was disappointed that it hadn't been there for its community in the way members deserve. Zhen said the company is working quickly to get its service back to full capacity.

"We know it's been frustrating for you, and please know that we will get to every request as quickly as possible."

The email came a day after an inquiry from CNN Business regarding customer complaints.

Zipcar sent CNN Business a statement Sunday evening, and said it would be increasing the number of call service agents by 50%, as well as adding hundreds of vehicles to its fleet.

"We acknowledge that in midst of operating during these difficult circumstances, we have let certain members down, and we are sorry for that," the statement said.

In that statement Zipcar also said they'd upgraded their cleaning protocols as part of their response to the pandemic that began in March. But customers told CNN Business when cars are available they're often dirtier than before.

"It was working for 10 years — brilliantly in my opinion," said Zipcar customer Judi Rowland. "Basically I loved them until I hated them."

She said she rented a car in June that was "filthy." The last straw was when her Zipcar rental wasn't available on July 4, throwing a wrench in her holiday plans to get out of New York City and visit family.

Some customers tell CNN Business that Zipcar has shifted reservations to a less convenient car parked miles from their home. Others said they've rented vehicles in various states of disrepair, with needed maintenance or body damage. Zipcar customer Alberto Sheinfeld told CNN Business he's still waiting to hear back from the company after part of the bumper fell off his Zipcar as he drove it last month.

Customers say they're angered by how tough it has been to get a response from Zipcar when things go wrong. Many say they have spent hours on hold.

A former Zipcar employee, speaking on the condition of anonymity, told CNN Business that with more than 20% of Zipcar's staff laid off this year, the quality of service has been impacted. Zipcar also changed call centers recently, according to the employee, which caused disruption to the service.

Joel Mosbacher, a New York rabbi, who nearly missed a funeral recently after he says a Zipcar he reserved wasn't in its parking spot, said he spent six hours on hold this week trying to get ahold of Zipcar.

Mosbacher said he's long been a happy Zipcar user, and that he rarely complains or holds people's feet to the fire. But he felt moved to then take to Twitter to complain.

"Most other businesses I've had interactions with the last four months, who are going through something Covid related just say, 'Please be extra patient.' I can do that," Mosbacher said. "But just not to respond or not to add more people to the call center. What the hell? Just tell me what's going on and I can work with that."

Following a Twitter exchange with customer service, he said the company then offered to pay for his Uber rides to the funeral. But after submitting the receipts, he said he was told they weren't reimbursable. He has followed up, but never heard back. Zipcar did not comment on the issue in its statement after being asked by CNN Business.

The issues are costing Zipcar some of its most loyal customers.

Bob Manix-Cramer, a Zipcar member for 10 years, always considered himself a Zipcar evangelist. He said he noticed the quality of cars dropping off as early as January, and that he's rented cars that smelled of tobacco and one with marijuana.

"There was probably enough marijuana in it that I could make a joint with what was left," he said. "It was unpleasant, particularly when I'm using it for a morning family adventure."

He recently tried to rent a car for a trip with his wife and baby. He says they walked to the parking spot, and the car he had reserved wasn't there. He waited on hold with customer service for 45 minutes as his baby had a meltdown, he said. He then gave up, canceled his plans for the day and went home.

He says it was the second time in a week he'd reserved a car, and found it wasn't there, he said. Now he's trying to cancel his membership.

But he won't do it yet. He said he needs to wait for a day when he has a few hours to kill and can sit with his headphones on and wait for someone at Zipcar to answer.

A Zipcar spokeswoman declined to share national data on membership trends, but said that in New York City membership applications in June increased 70% when compared to June 2019, and that the average cancellation rate is lower over the past several months than over the same time period in 2019.

But some customers are going to great lengths to cancel their subscriptions.

Nancy Arnold joined Zipcar in June to move furniture in Brooklyn, New York. She says she twice attempted to rent a car, she said, but neither was available when she arrived to pick up the vehicles. For her second rental, she said Zipcar's app let her reserve a van at an Ikea in Brooklyn, New York. She arrived at the Ikea, and couldn't find the van. She said an Ikea worker told her Zipcars hadn't been available there for years.

Arnold said she couldn't get through to Zipcar to cancel her membership, so instead canceled her credit card to block Zipcar from charging her monthly fees.

Boston resident Jessica Meher said she wanted to cancel her subscription recently, but couldn't get through to Zipcar.

She said she called her credit card company and told them to suspend payments to Zipcar.

"It was literally the only option," Meher said. "It's very apparent they've abandoned the car on the side of the road, so to speak. It doesn't seem like they're servicing anyone."

Zipcar was founded with a mission to make car ownership unnecessary. But now car ownership looks appealing to some of its members.

Carolina Wang, who owns a New York bakery and uses Zipcars for deliveries, said she now plans to buy a car because the service is so unreliable.

Wang did get through to customer service recently, and she said they offered her a $50 driving credit as an apology. On Thursday she reserved a car and went to pick it up. She said the parking spot was empty.