10 People taken into custody after standoff with police 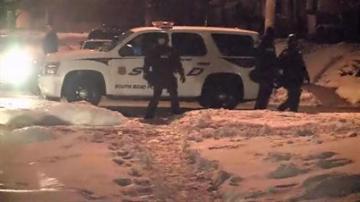 SOUTH BEND, Ind. — Officers surrounded a home on South Bend's west side after police responded to a home invasion around 10:30 p.m. Wednesday.

According to police, two suspects with guns broke into a house on Studebaker Street and threatened a mother and her three children.

"She reports that two armed men broken in through the back door and rummaged through the house but ultimately took nothing,” said Phil Trent of the South Bend Police Department.

Footprints in the snow and the K-9 unit led police to a home on Fassnacht Street.

The residents refused to open the door and the SWAT team was called in to assist.

"The occupants finally surrendered and ultimately, I believe, there were 10 people who came out and were detained for a bit,” said Trent.

But the suspects were not identified. None of the men were arrested and no evidence was found in the house.

Police say the home invasion appears random and there is no reason to believe there were drugs in the house that was broken into.