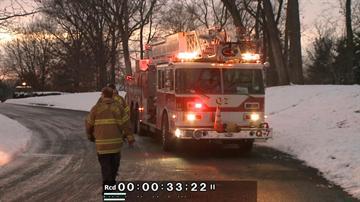 SOUTH BEND, IND. --  A mother frantically called 911 after her 10-year-old daughter flew off her sled and wasn't moving when she landed, so South Bend fire ambulances rushed to the scene to help.

"We saw the neckboard and the backboard come out and then we knew it was pretty serious", said club member Matthew Brennan.

Club member Matthew Brennan was sledding on the golf course with his family when he saw the young girl sled down this hill and hit a bump.

"The little girl was coming from this angle over here and couldn't see this big bump over here..hit the bump and went airborn and hurt her back," said Brennan. "By the time I got to the top of the hill I saw that she wasn't moving."

Brennan said he and his family sled every year and he has even injured himself sledding down this hill.

"I've seen a tooth knocked out and last year I got the wind knocked out of me and bloodied my leg," said Brennan.

South Bend Fire Captain David Schackow said he gets called out on a handful of sledding injuries every year.  He said he understands ki's enjoy sledding, but there are ways to be a little safer.

Brennan says he and his family will continue sledding.

Brenna said he will watch his kids closely so they don't end up in a similar situation.

The firefighters at Morris Country Club say the little girl did not have any broken bones or life threatening injuries.