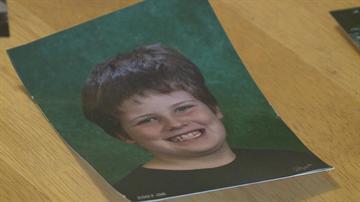 SOUTH BEND, Ind. – Randi Downhour sat in her home to sort through photos of her son on Monday afternoon. Pictures of Cory were scattered across the kitchen table as Downhour wept, she said “I just loved him so very much.”

Downhour had just come from the cemetery; she was there to purchase a burial plot for her 12-year-old son, Cory. Downhour was still in shock, disbelief, “I had a doctor’s appointment scheduled for today, he’s supposed to be at the doctor.”

Downhour said she was not ready to speak on camera, but talked with ABC-57 News for nearly an hour. She spoke about her son and what happened at her house Friday night, before the kids took off.

Downhour said Cory had two friends over, when she went to bed around 11:30 the three were playing video games. Sometime between then and 1:45 Saturday morning the 12, 13, and 14-year-old snuck out of her house.

At 6’2 and 250 pounds, Downhour said her son was difficult to control at times, but he had a good heart, “He was just a big goofball.”

When Downhour woke up at 3 a.m. Saturday morning Cory and his friends were gone, but there were a lot of other kids at her house who she did not recognized.

“I don’t know who gave them the car,” Downhour said she had no idea who the 17-year-old boy is the owner of the silver Ford Expedition the kids took off in.

According to the St. Joseph County Sheriff’s Department the 17-year-old told investigators he is dating Cory’s older sister, 16-year-old Sarah.

Police said when the 17-year-old was brought in for questioning early Saturday morning he was intoxicated and uncooperative, but later admitted he let the kids take his SUV. The three kids asked to take his vehicle out for a drive and he handed the keys over to the 14-year-old boy, the oldest in the group.

Downhour said she just recently learned her son and his two friends left her home that night to go egg some houses nearby. But less than four miles of the Downhour’s the 14-year-old behind the wheel lost control of the SUV, it flipped several times before it landed in a ditch along Quince Road, just north of Jackson Road at 1:45 Saturday morning.

The driver and the 13-year-old girl were hospitalized with minor injuries, 12-year-old Cory who was in the backseat of the SUV was pronounced dead at the scene. Investigators said it did not look like any of the kids had seatbelts on at the time of the crash.

Shortly after Downhour woke up around 3 a.m. she got a call from police, Downhour said met officers at the crash site, “I had to go out there to identify my baby’s body.”

Downhour said the week before the crash; she pulled her son out of Greene Intermediate School because he was being bullied and very unhappy. She had planned to start home schooling him on Monday, Downhour said she hoped it would help him and his spirits were high.

“I’m just glad he was with his friend and he was happy,” Downhour said, “I don’t know if I’ll take comfort in that tomorrow, but for today I will.”

Both the driver and the 13-year-old girl have been released from the hospital, Downhour said she has not talked to the driver, Cory’s best friend, 14-year-old Johnny. “I’m going to, I need to see him, I need to tell Johnny this is not his fault.”

The St. Joseph County Sheriff’s Department ordered a toxicology report for the driver, those results are still pending but a deputy told ABC-57 news the preliminary tests that were conducted at the scene were negative.

According to the Sheriff’s Department the investigation is almost complete and the report should be sent on to the prosecutor’s office on Tuesday, there it will be determined if any of the parties involved will face criminal charges.