13-year-old released from hospital after hit and run accident 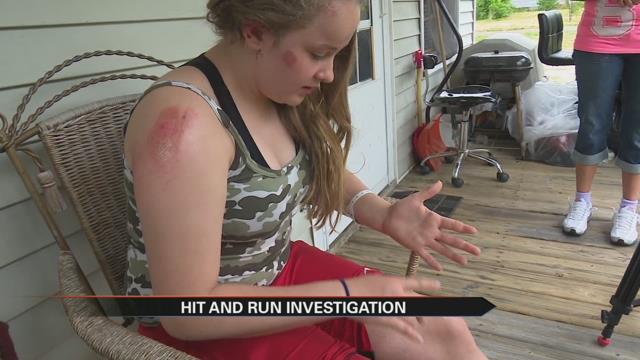 A teen age girl is sent to the hospital after a hit and run accident happened Monday night on Hepler Street.

Police continue to look for the suspect in this case and family of 13-year-old Aryana Hoover cannot believe someone would leave the scene after hitting a young girl on her bike.

When Jessica Hoover woke up to police lights flashing outside her home she says her stomach dropped.

“It’s the worst feeling in the world. They were like she’s at the hospital right now she’s been hit by a car,” says Jessica.

On Monday night Jessica’s 13 year-old-daughter Aryana Hoover was spending the night at her grandpa’s house near Hepler Street.

“Well I was riding my bike because I went to go pick up my friends,” says Aryana.

Aryana says returning back to her grandpa’s around 11 p.m. she does not remember much.

“I was like on top of the hood and then when he stopped I kind of rolled off,” says Aryana.

A car hit Aryana off her bike leaving her a bloody mess.

The day after the accident she has stitches behind her ear and road rash from skidding on the pavement.

Aryana says her body is sore and she has scrapes on her arms, hands, knees, and feet.

Thankfully some neighbors were able to help her after being hit.

“We got her cleaned up but then they called the police and everything but by the time the police here the guy had gotten back in his car and took off,” says Michael Lenczewski.

Police gave a vague description and say they are looking for a white male driving a white car.

The car may be an Impala with some damage to the front right corner.

“To get in your car and take off right after you hit a little girl on a bicycle at that speed ya know coming down through here that’s just nonsense,” says Lenczewski.

Although Aryana can’t recall details of the man or the car that hit her she says the impact will never leave her.

Jessica says she is extremely grateful to the neighbors that helped her daughter.

If you have any information regarding this case, contact St. Joseph County Police.