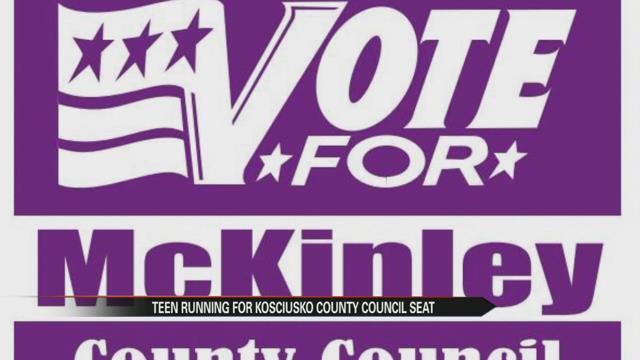 A Warsaw Community High School student is not letting his age hold him back. He is running for office and is the youngest on the ballot for a County Council seat.

17-year-old Evan McKinley hopes to fill one of the three Kosciusko County Council At-Large Seats in the next general election.

Evan has prepared for this moment the past couple of years and says he has done everything he could to prepare for this potential job.

“Before I would go to bed I would spend a couple hours going through the council’s minutes that they posted online and just looking over each thing they did. I would look for terms I didn’t understand, research what they meant.”

He added that he has taken a number of business classes and served on campaigns of now elected officials to learn as much as possible about the position.

“I would like to think that I know my stuff. I’ve been taking as many business classes as possible in high school this year and last year,” he added.

His father Jack has owned a business in the area for many years. He says that has helped prepare him for County Council, the fiscal branch of the county's government.

“For my whole life, my dad has run his own business and I’ve seen first hand how budgeting works for your own business,” he said.

Evan's father is proud to see his son working toward this goal.

"It's very rewarding because I feel like I contributed to him in developing his skills. I have always been aware that he had a passion for people, even when he was very young," said Jack.

He recalled of moments when Evan was younger and how he would start conversations with people he did not know. He is proud to see his son take on this endeavor.

"It's an exciting experience for me even though I'm in the background," he added.

The 17-year-old said if he fills the role there are a number of things he wants to improve on within the county.

"First I want to take a look at our budgets and make sure that we’re wisely spending our money and that every dollar that’s coming in is looked at and making sure that what we’re spending on is what we should be,” he said.

He also wants to look at the wheel tax and the cost that residents have to pay.

“The second thing this, I want to keep a close eye on the wheel tax because I know that has hit a lot of people really hard. As soon as we can start looking at that and maybe dialing back the amounts that we’re taxing people because it’s at the maximum amounts right now that the state mandates that they can be. It’s been really good for infrastructure, we really needed the money but as soon as we can start taking that heavy tax burden off the
people, the better,” said Evan.

Evan also wants to work with the sheriff's department to make other improvements.

Currently he is 17 but by the time of the general election, he will be 18. That will allow him to vote as well as run for office.

“I have a real passion for this type of work. I want to be a part of our community and helping move us forward into the future and I felt like if I could get into that then now was the right time to do it.”

This past week he filed his paperwork to run for office.