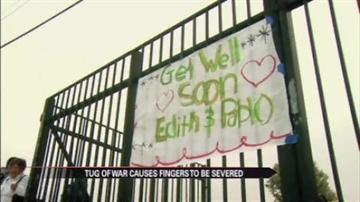 According to a new report, one of the victims lost four fingers in the game.

Doctors at the local hospital tried to re-attach their fingers. But there is no word whether or not they have been successful.

School officials said some changes need to be made.

"We'll review everything that went on with the site staff that was present," said Superintendent Nick Salerno. "We'll review that with district personnel, come up with some guidelines or see what need to do or say what we will not do in the future and then share that information with our other schools."