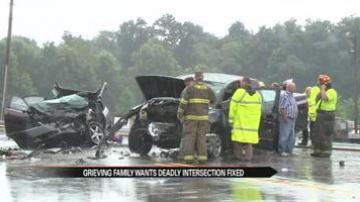 The Michigan Department of Transportation said they recognize there is a problem at that intersection, but they said improving safety requires a lot of money they don’t have right now.

Monday afternoon, 4-year-old Adrianna Chanthavongsavath was killed in a crash at the intersection. Her mother Linda is in a Kalamazoo hospital.

Family members said she broke her ribs, ankles and both her legs.

The other driver also remains in the hospital in critical condition.

Linda Stone knows how dangerous that intersection is.

“It was like deja-vu all over again. When I heard about how serious this was it just made me sick to my stomach,” said Stone.

“It does take me back to May 1st the day my dad was killed and it just hurts all over again,” said Ashley Stone.

Her father Jon was just a few minutes away from home when he was killed at the intersection.

“He drove that intersection many times a day for 30 years. So he wasn’t a stranger to it at all,” Ashley said.

They said something needs to be done now.

They have started to keep count of the number of car accidents here.

MDOT said they are aware of the problem. They said engineers are reviewing the road and crash numbers in response to recent accidents.

“We’re looking at ways we can improve safety there. That may or may not involve a speed limit change or a single addition,” said MDOT Spokesman Nick Schirripa.

He said a single addition could be closing one leg of the intersection or constructing a roundabout.

But right now there is no money. MDOT said it could be be two years before they can get to work on the project.

Stone said improving safety could be as simple as a sign.

“A sign or anything so you have some advance notice when you get to that point," said Stone.

The Stones said Cass County deputies said there needs to be a certain number of deaths at an intersection for something to be done. But they don’t want anyone else to get killed before a change is made.