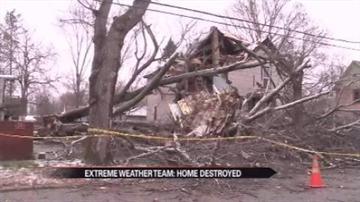 NILES, Mich. -- Police were called to a house in Niles after heavy winds knocked down a tree causing a house to collapse on the occupants.

Shawnette Baker, her two kids, her mom Sue and aunt Diane just moved into the home in September.

When the tree fell on the home the two walls on the top floor collapsed and Baker rode the debris all the way down.

"I went to sleep in my bedroom and I woke up in my driveway,” said Baker.

Baker only suffered minor injuries to her foot, but her aunt wasn't so lucky.

"Upon arrival we found one victim on the first floor trapped under the joist that had come down from the second floor," said Niles Fire Chief Larry Lamb.

Baker's aunt Diane was trapped under a joist and pinned to her bed. She had to be extricated with shoring tools and rushed to memorial hospital

Lamb says his fire crew knew just what to do to get Diane out safely-because they train quarterly with the Mavis Tactical Rescue.

"One of the specialties we do is collapse rescue,” said Lamb.

As sad as Baker is to have her home destroyed right before Christmas, she says she can't thank those firefighters enough for saving her family.

"I cannot express how happy I am that I'm alive, my aunt’s alive and that my kids were not hurt,” said Baker.

Baker was renting the house.