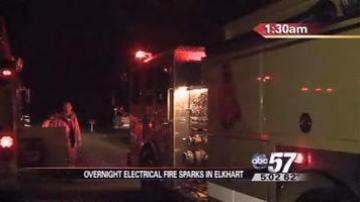 ELKHART, Ind. – One Elkhart family is simply grateful this morning. A fire sparked in their garage, barely sparing their home that is just feet away.

ABC57 spoke with the Assistant Fire Chief who said a space heater was left on in the garage. He believes that the cord attached to it overheated and short-circuited, which ignited the flames. He also said that most of the damage was on the inside.

Firefighters went to fire at the corner of Chevy Chase and Manhattan Street around 1:30 a.m. The Assistant Fire Chief says the homeowner’s 20-year-old son first noticed the smoke, and called 9-1-1. But he also poured several cups of water on the electrical fire which is not safe to do.

“He said he was coming home from a friend’s house. They did the right thing by calling too, but he also took it into his own hands which can sometimes be the wrong thing to do,” said Cleveland Twp. Assistant Fire Chief Mike Graham.

Graham also said that all space heaters should be unplugged around this time of year.

He encourages everyone to check all their outlets in their home and garages for fire hazards.