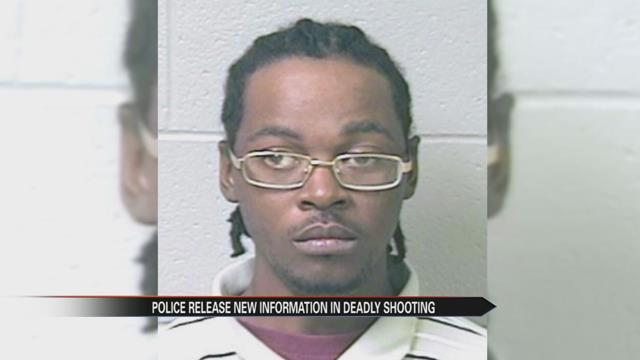 Bond for Roy Thompson, the man accused of shooting and killing David Krockett Krieger on Friday, was set at $2,500,000.

According to the prosecutor, Thompson was given $500,000 in addition to the $2,000,000 because he was violating his probation by carrying a gun.

Thompson was on probation for carrying a concealed weapon.

On Monday Thompson was charged with open murder along with several other firearm related felonies. He slipped into a late arraignment around 4p.m.

ABC57's Alexandra Koehn has put in several freedom of information requests after receiving some conflicting information on the case.

On Monday police told ABC57 that the victim's brother and the suspect exchanged gunfire. That was not listed in the initial press release on Friday.

Steve Krieger, Dave Krieger's brother, was reportedly behind the business when he told police he saw Thompson shoot his brother. He told a detective that he ran towards the suspect and returned fire.

Police also disclosed that Dave Krieger and murder suspect Roy Thompson got into an altercation after Krieger told him to stop kicking a neighbor's dog.

On scene Friday the Sheriff said the victim was pronounced dead at the scene.

Paul Bailey said, “And when they arrived on Friday they found someone deceased, that being one of the owner’s David Krieger. During the investigation they were able to come up with a suspect’s name.”

After a five hour manhunt, Thompson was arrested for the murder in a home on Agard Avenue about half a mile from the scene.

On Saturday the suspect's family came out saying the murder wasn’t as cold-blooded as police made it seem.

Jeannette Streeter-Ward said, “The man put his hands on my brother! The man touched my brother!”

Streeter-Ward said her brother shot Krieger in self defense during the altercation.

Multiple sources revealed there may have been a scuffle as well.

The victim’s brother told police he witnessed the shooting from a fenced in area behind the Michiana Supply Inc. building.

According to police Steve Krieger ran through the business, out the front door, and got in a gun fight with Thompson after watching him kill his brother.

The Krieger family has decided they do not want to comment.

Thompson is scheduled to be back in court for a preliminary hearing on December 29th. Attorneys have a case conference on December 23rd.