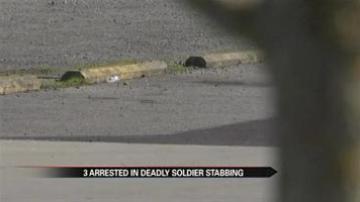 LAKEWOOD, Wash. -- Three active-duty soldiers have been arrested after one of them allegedly stabbed a fellow soldier to death along a highway.

The three arrested were in a group of African American men who confronted three Caucasian soldiers who were walking home.

Monday, police are saying it does not appear to be a hate crime.

Twenty-year-old Tevin Geike died on the side of the road from his stab wounds.

"It's upsetting to see that someone who made it through combat tour and to come back and his own country men are that willing to assault them," said Staff Sergeant James Lawrence.

The victim was out celebrating his release from the military after serving out his contract the night he was stabbed to death.