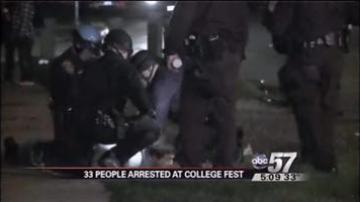 KENT, Ohio. -- Some video out of Kent Ohio captures college student being arrested for brawls from an annual event.

It's from "College Fest" at Kent State University. Thirty-three people were arrested this weekend after fights broke out at a huge block party.

The SWAT team was even called out in full riot gear. Back in 2009, 65 people were arrested at the same event.