4 charged in Indiana, used 'Wounded Warrior' name to raise over $150,000 for personal profit 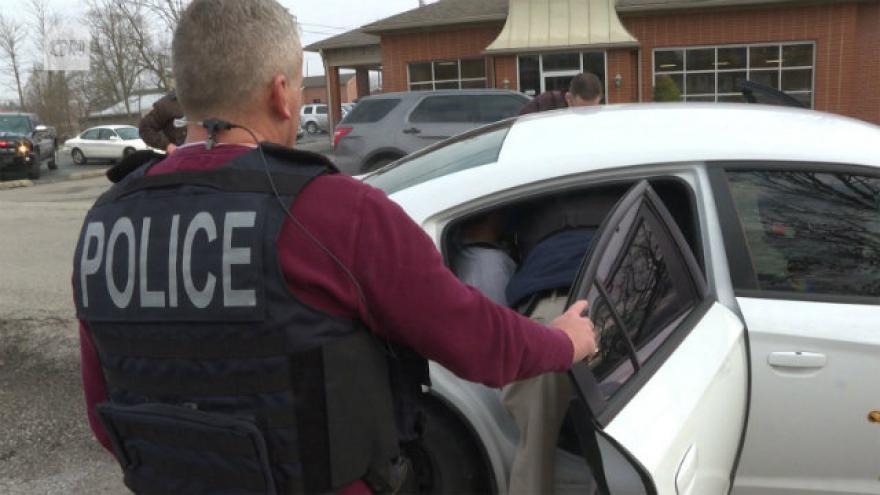 Dan Cristiani of Clark County, Indiana, thought he was helping veterans. His late father had been awarded two Purple Hearts, so when Cristiani received a call from the \"Wounded Warrior Fund\" asking for a donation to help Indiana vets, he felt it was his duty to give. And give again. Photo courtesy CNN

(CNN) -- Dan Cristiani of Clark County, Indiana, thought he was helping veterans. His late father had been awarded two Purple Hearts, so when Cristiani received a call from the "Wounded Warrior Fund" asking for a donation to help Indiana vets, he felt it was his duty to give. And give again. Over two years, the 69-year-old donated more than $1,000. But the money never made it to veterans, and instead is believed to have fueled the lifestyle of suspected crooks. 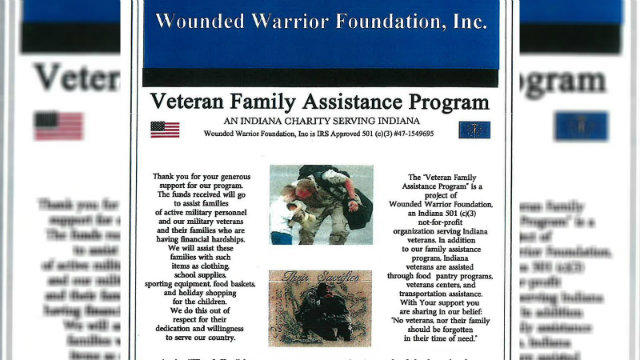 The Wounded Warrior Project is a legitimate multimillion-dollar nonprofit organization with nationwide recognition that helps wounded, ill and injured veterans.The Wounded Warrior Fund, on the other hand, was a complete scam, federal prosecutors say. Jeff Simon/CNN

The Wounded Warrior Project is a legitimate multimillion-dollar nonprofit organization with nationwide recognition that helps wounded, ill and injured veterans.

The Wounded Warrior Fund, on the other hand, was a complete scam, federal prosecutors say. After a three-year investigation by the US Secret Service and Clark County Sheriff's Office, four people were indicted February 28 by a federal grand jury. The case was unsealed Friday.

The man picking up the checks from Cristiani was 44-year-old James Linville of Clark County. He incorporated the Wounded Warrior Fund in 2011 and Wounded Warrior Foundation in 2014, which presented themselves falsely as nonprofit organizations serving veterans in Kentucky, Indiana and Ohio. Linville worked with three associates to defraud more than 1,000 victims and collect more than $150,000 in traceable donations over six years, according to investigators. The indictment alleges they told donors 100% of their contributions would go to veterans and their families. Investigators say no money went toward veterans.

The Justice Department publicly announced the charges Friday morning. "The acts of these fraudsters have eroded the trust and good will of those who want to contribute to legitimate fundraising organizations, including those that support our veterans," US Attorney Josh Minkler said in a statement on Friday. "Our American veterans have dutifully served this country through many wars and deserve better than to be deprived of donations from giving donors," Minkler said.

The four are suspected of using aliases to make cold calls and flyers and to seek business donations to help veterans and active-duty service members and their families in need -- payable in cash, checks, gift cards or in-kind donations, according to law enforcement.

"No veterans' families have benefited in any way in this case, that we could find," Special Agent in Charge of the Secret Service Louisville Field Office Richard Ferretti tells CNN. "They've used it at casinos, they've used it for medical bills, they've written checks to each other in cash, so we can't find a single dollar, so far, that's gone to a veteran in this case."

Three pleaded not guilty in court this week and the fourth is set to appear in court later this afternoon.

Linville made calls pretending to be "Sergeant Bob Davis," while his associate Thomas Johnson used the alias "Paul Bradley," according to charging documents. The Secret Service tells CNN that neither Linville nor his compatriots ever served in the military.

The group's flyers for a "Veteran Family Assistance Program" and "Hoosier Overseas Calling Card Program" stated "the funds received will go to assist families of active military personnel and our military veterans and their families who are having financial hardships." The flyers listed programs to help Indiana and Kentucky veterans, from calling card campaigns to supplies for "those who defend our freedom." They promised to provide money to the VFW Departments of Kentucky and Indiana, the Kentucky and Indiana National Guard, Camp Atterbury and the USO, a law enforcement official said.

Those organizations told Secret Service investigators that they never received any money from the groups.

There was no calling card campaign, no food pantry, no holiday shopping or school supplies for veteran families. Instead the money allegedly went to drugs, gambling and personal gain for the four people charged. The federal indictment unsealed Friday states Linville and his accomplices made ATM cash withdrawals and debit card transactions at a casino, a liquor store, a tobacco outlet store, medical providers and elsewhere.

They are also accused of calling local businesses to have food, hotels and services "comped" for veterans. "The free hotel rooms were often used for members of the conspiracy and others to engage in drug activity," a law enforcement source with knowledge of the case tells CNN.

Those non-cash donations added up, said Clark County Sheriff Jamey Noel. "This organization -- this fake organization -- was asking people for food donations, for hotel rooms for veterans, for donations from different businesses that would be raffled or organized off for this, what people thought was a legitimate organization," he said.

Linville was arrested in a medical treatment facility last Friday in Lawrenceville, Indiana. Two alleged accomplices, Joanie Watson and Thomas Johnson, were taken into custody at home on Tuesday by a federal task force consisting of Secret Service agents, US marshals and sheriff's deputies from Clark County. Linville's ex-girlfriend Amy Lou Bennett was captured Wednesday in a trailer park in Kentucky. Authorities had a difficult time tracking down Linville and Bennett, who appeared to be on the run, knowing their freedom might be waning.

"We are grateful law enforcement will hold those involved accountable for their actions and the harm they have caused our nation's bravest and their families. WWP is committed to ensuring donor intentions are honored, and we take this responsibility seriously," the group tells CNN. The group says its fundraising efforts do not include door-to-door solicitation or cold-call telemarketing.

Veterans like Jim Dexter, commander of VFW Post 1693 in New Albany, Indiana, say fraudulent fundraising in the name of veterans makes it hard for legitimate vet organizations like his to raise much-needed funds.

"You are taking money from veterans that should go to actual veterans organizations, to help yourself and to fraudulently defraud the public and all veterans that have served their country," said Dexter, who also works with the local American Legion. "None of us have the monies to donate that we had years ago, because of situations like this."

James Haehl, an eight-year Army veteran and Clark County detective not involved in the case, was angered to hear about it.

"They shed blood for our country. And this guy is using the Wounded Warrior name to obtain money for himself, and as a scam, with nothing being returned to any veterans, or wounded veterans, or people that really need the money. ... It makes me sick."

The flyers had painted a different picture.

"We do this out of respect for their dedication and willingness to serve our country," the flyers, which also stated the group was an "IRS Approved 501(c)(3) charity," read. There is no evidence that Linville or his crew ever applied for 501(c)(3) status with the IRS, only for an Employee Identification Number. They even went as far as giving out printed receipts that instructed donors to "please keep a copy of this receipt with your records for tax deduction purposes," according to a copy obtained by CNN.

Linville has a criminal history of drugs, check fraud and domestic battery. His associates also have an array of drug arrests, according to law enforcement.

After being interviewed twice by investigators, Linville began to leave upward of 30 voicemails on Clark County Sheriff's Detective Donnie Bowyer's answering machine. CNN listened to the calls, which ranged from casual to threatening. In July 2017, Linville told the detective, "You've got some problems coming, bud...you've got major problems...put me in jail, I dare you."

Your f*****g state laws don't apply to me in any way," Linville told the detective on his recorded voicemail. "I will make a mockery of your f*****g court. And I'll destroy the sheriff's department."

Prosecutors believe the voicemails demonstrate intent by Linville to obstruct the investigation, according to charging documents.

"He was upset because his good times were coming to an abrupt end," Sheriff Noel said.

Bowyer worked on the case with Secret Service Special Agent John Ely for three years and is happy to see the case end with arrests. "I think it's closure to this part of the investigation," Bowyer said. "It was a scam involving veterans, probably about the worst you can do."

The victims who donated to the fraudulent group never got their money back. Investigators located six bank accounts used by Linville and all of the money had been spent. They were unable to trace all the gift cards and in-kind contributions donated.

Cristiani says he receives solicitation calls every day and that it's hard to say no to people sometimes, especially if they're persuasive. Linville was one of few who persuaded him.

"I felt like I was taken advantage of," Cristiani said. "Him working on my soft heart, for me giving to our servicemen, and I believe that he hit the soft spot, and I felt like I needed to give to help out the people that helped us."