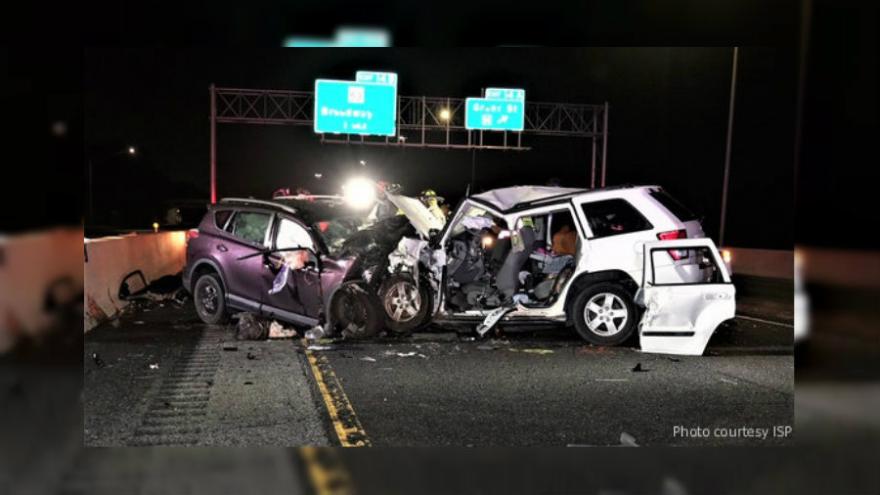 A preliminary investigation was conducted and an Indiana State Police reconstruction team revealed that at approximately 1:41 a.m. Saturday, troopers were dispatched to a report of a wrong-way driver heading westbound in the eastbound lanes of traffic near the 21 mile marker on the I-80/90.

Authorities say the vehicle was allegedly driving without headlights activated.

A short time later, officials received a report of a crash located at the 13.1 mile marker just before the Grant Street exit.

A 2017 Toyota SUV crashed in a head-on collision with a 2007 Jeep SUV that was traveling in the left lane, officials say.

The driver of the Toyota died at the scene and has been identified by a member of the family as 25-year-old Tiara Davis of Calumet City, Illinois according to the Lake County Coroner.

The 2007 Jeep occupants have been identified by family. The driver has been identified as 45-year-old Octavio Chavez-Renovato of Chicago, Illinois. Eva Gonzales, 34, was the front seat passenger and a 14-year-old son was also in the vehicle. All are reported to have died at the scene, according to the coroner.

Three daughters were also traveling in the Jeep including a seven-month-old, a 10-year-old and an 11-year-old who survived the crash but sustained serious injuries.

A short time later, the 10-year-old was air-lifted to Advocate Christ Medical Center. The 11-year-old and seven-month-old were flown to Comers Children Hospital in Illinois.

Alcohol is believed to have been a factor in the crash. Toxicology results are pending according to the coroner.

All eastbound traffic was closed for a short duration with the outside shoulder opened for traffic.