4 weather related car accidents in less than in hour 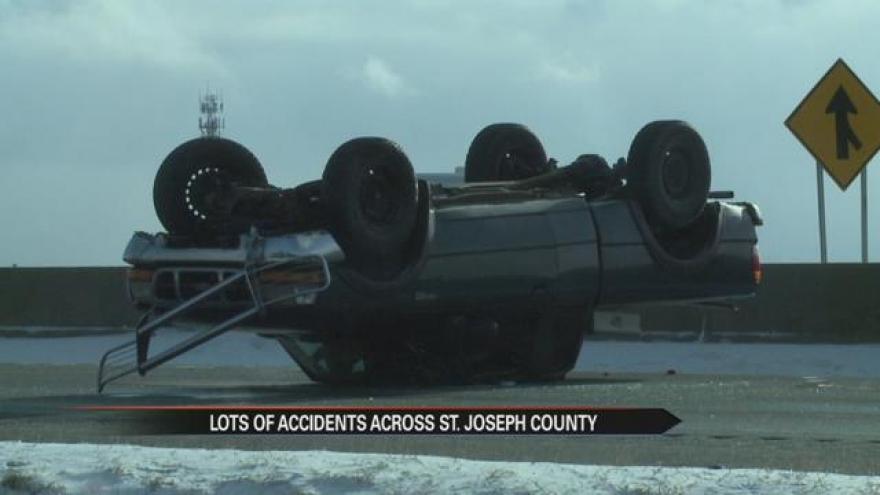 Crashes, slide-offs, rollovers all across St. Joe County, from county roads, to the toll road to the bypass. On the bypass alone, there were three accidents in just one hour.

16 crashes have been reported and three slide-offs since midnight to 4 p.m. on Thursday, according to St. Joe County Assistant Chief, Bill Thompson.

That number might increase depending on how bad the weather gets. One accident happened along State Road 2 in New Carlisle. A county police officer was standing outside of his cruiser when he got clipped by a semi’s trailer. The impact caused him to go airborne and land in a ditch.

He was taken to the hospital and is undergoing treatment. Thompson said just before 1 p.m. three cars crashed into each other. Two cars had originally crashed on State Road 2 near Pine Road, then a third car got involved. Inside that vehicle was a 9-year-old.

“A little girl got check out but wasn’t transported to the hospital,” said Thompson.

Thompson is saying drivers, at this point, should know what to do when they get behind the wheel. “We’re hoping folks have their winter driving legs under then and remember to slow down and take a little bit of extra time.”

Thompson started his shift around 9 a.m. on Thursday. By 1 p.m. he told me he had already heard or seen more than a dozen weather-related crashes. “In those areas of the county where we have traditionally areas where the wind blows in the right direction it tends to ice over quicker than other spots.”

Drivers also concerned about those rollovers, crashes and slide-offs.

“I do know that my own car was slipping,” said Karen Kazmeierzak, a driver from South Bend. “ Just go slow, stay in the right lane and just take your time.”

Thompson says his main concern is that during the evening hours, more and more people will be using the bypass coming out of work.