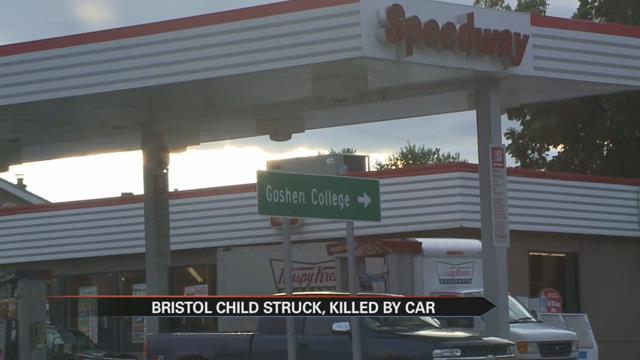 The Elkhart County Sheriff’s Department says 4-year-old Cameron Fulks of Elkhart died when he was struck by a vehicle at the Speedway gas station on East Vistula in Bristol.

His mother, Marilyn Fulks, was inside of the gas station when he got out of their parked car.

34-year old Justin Poley was driving through the parking lot towards SR 120 when police say the child ran into the path of the vehicle.

Officials say the child was struck and suffered a fatal head injury.

The incident hit home for many families in Elkhart, especially those with young children.

Richard Riege and Angelo Santiago were working at the Saint Joseph of the Cross Episcopal Church across the street from the Speedway gas station.

“We were at church, fixing the doors. But then we heard a bunch of sirens,” said Riege.

That’s when Riege and Santiago discovered it would be far from a typical day.

“There was a gigantic blood spot in the driveway down there. I can’t imagine how the parents feel or the person who hit him,” said Riege.

Witnessing the aftermath had a profound impact.

“It’s a loss. I have kids, you know.  I can’t imagine what they feel like,” said Santiago.

“I have a 6-year-old granddaughter and I’ve got five kids,” said Riege.

Riege and Santiago say the incident is a reminder to be especially cautious when caring for their children and grandchildren.

“I don’t know what happened for the little kid to run out, sometimes they just don’t see them. We’ve got to be cautious,” said Santiago.

They are also reminded to hug their little ones a little closer.

“My little girl she’s really precious. My prayers go out to the family and for the person who took the life of the little kid,” said Santiago.

An autopsy was conducted Sunday which showed that the cause of death was major head trauma and the manner of death was accidental.