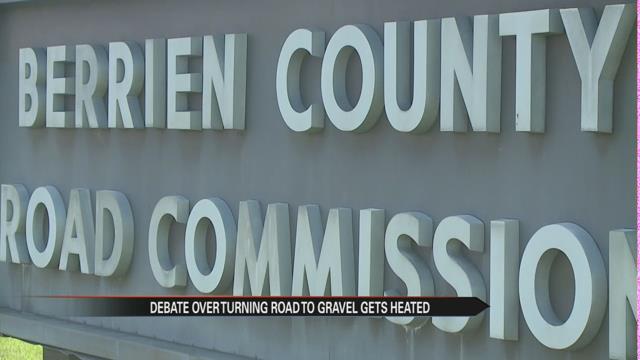 Berrien County Road Commissioners said in a meeting on Wednesday that 45 miles of paved roads that are deemed in poor condition will be turned into gravel roads.

Three people from three townships presented petitions to the board of Berrien County Commissioners.

The residents that signed the petitions live on the roads already.

Nancy Wuszke said, “It's emotionally disturbing! They end up being like a washboard, does the road commission come out and flatten that out? No.”

Wuszke was in tears at the meeting because she doesn't want the street she lives on to be turned into gravel.

Wuszke said, “They can patch it at a much lesser cost. It decreases our property values, our vehicles will be in danger! There will be dust in the house, there's breathing issues!”

Commissioners said their job is to keep the roads safe, and filling dozens of potholes is only putting a band aid on the problem.

Jess Minks said, “We have to have the money to fix the roads and your state legislators are not doing anything except looking ahead, taking from here, and debating.”

Officials said in the long run this will save millions of dollars in maintenance.

Dave Lorentz has lived on a gravel road for several decades and he shared his opinion.

Lorentz said, “We usually put up a swimming pool in the summer for the grand kids and stuff and we can't even put up a pool anymore because the dust gets into the water so badly that it turns it brown.”

Lorentz said South Blue Creek Road was at one time a gravel road but now it's digressed to just dirt and dust.

Lorentz said, “Somebody needs to find the funds to get this done. It seems like the county general funds has as much money as they want to spend on health department building and millions of dollars on all that stuff but we can't even get potholes even patched.”

The road commissioners said they don't want to turn roads to gravel, but taxpayers have voted down tax increases so their hands are tied when it comes to funding.

Minks said, "If it was voted down, that means you're happy with the decisions we have to make, that are very unpleasant, to do what we're having to do."

The roads could be turned to gravel as soon as the end of June.