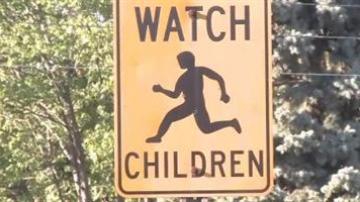 SOUTH BEND, Ind. -- A little girl was hit by a van on Grant Street Sunday evening.

Despite a "Watch Children" sign, 5-year-old Mercedes Richart was struck by a van.

Her aunt, Sarah Walden, said she was playing outside with her friends when she ran out into the street.

“We were in the house and the kids were outside playing and a van went to go turn the corner and he didn’t see her and then he saw her, but it was too late,” said Sarah Walden.

Mercedes was rushed to the hospital with scrapes and bruising all over her body, and she was complaining of head pain.

The sergeant said Richart was only taken for observation, but still in shock from the accident.

“She was shaken up, she was crying and one of her relatives was holding her,” said Sgt. Coles.

And the man who hit her, who happens to live two houses, down was pretty shaken up too.

“He had to go home and get his oxygen,” said Sgt. Coles.

Officers advised the neighbor he should not leave the scene of the accident, but were understanding of the man’s health condition.

“You need oxygen to live so I wish he would have left his vehicle here so we could have seen exactly what happened,” said Sgt. Coles.

Sgt. Coles kids in the area do not have anywhere to play but outside in the neighborhood, so drivers need to be aware at all times on these side streets.

“I want to tell drivers to watch for kids who are playing on these side streets, if you see a ball rolling there will most definitely be a kid following it,” said Sgt. Coles.

Sgt. Coles also said the man who hit the 5-year-old will most likely not face charges and he said this whole thing was just an unfortunate accident.

Mercedes was released from the hospital Sunday and is doing fine and recovering at home.