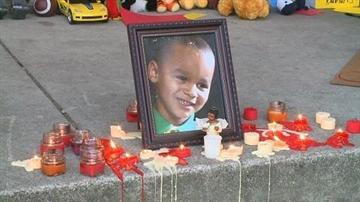 ELKHART, Ind. -- Five-Year-Old Damaris McGee was listed in critical condition at Riley Children’s Hospital as of 10:30 Monday night. He was shot in the head at his home on Chapman Avenue, in Elkhart, on Sunday night.

Damaris’ other uncle, Brian Grant Allen, posted on facebook “my brother just shot my 5-year-old nephew in the face we need prayers.”

The boy’s mother shared the same sentiment. She posted, “May 3 2006 i was truely blessed with my 5yr old son Damaris Tyrone McGhee an he has ben shot close range n the head by a grown man PLEASE every1 pray 4 my son, my LIFE my WORLD.”

Hours later, Allen posted, “this is no game and and anyone who shoots a child an pulls the chair from beneath him an let himor her hit the floor an u leave like nothing happened not run didnt try to help but left an thts your blood tht was no accident.”

Police have not commented on whether the shooting was intentional or accidental.

Friends, neighbors, and other family members said the situation sheds light on a community-wide issue.

Damaris’ aunt-in-law, Chastity Pettis, said “The gunplay needs to stop. The gun violence needs to stop. Period. I mean kids are involved, kids are getting hurt. Seriously. This needs to stop. We all need to come together as a community to make it stop. “

Close family friend, Raquel House, said she helped set up a prayer box and board for the same reason.

“We have to make this result be positive. In the way of, we cannot let this go in vain,” House said.

Children and adults signed the board, put prayers into the box, and lit candles that surrounded a picture of Damaris.

A fund has been set up with Teachers Credit Union called “Damaris’ Dream” to help his single mother pay for medical bills at Riley Children’s Hospital.

Many at the gathering Monday night said they hope their prayers go a long way.

“Well I know he’s going to pull through because he’s a strong little boy, ” said neighbor Sharday Hurd. “No kid deserves that situation. Because they haven’t did anything. They’re innocent.”

Some described Damaris as goofy, athletic, fun, loving, and full of energy.

“If you look at him, and you know him. Damarius represents life. And he will resonate in yourself, all the childhood laughs and memories that we had when we were children,” House said.

Stay with ABC 57 for updates on Damaris’ condition.