5-Year-old suspended for a "terrorist threat" 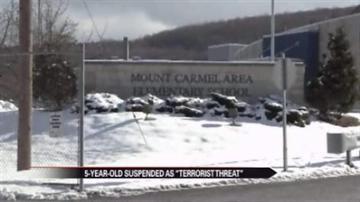 A Pennsylvania elementary school suspended a five-year-old girl for making what is being called a terrorist threat.

The kindergartener was suspended from Mount Carmel Elementary School for threatening to shoot another child, but her weapon was a Hello Kitty bubble gun.

A few days ago she and her friend were blowing bubbles at each other and the school called it a "terrorist threat".

School officials initially suspended her for 10 days, but then reduced it to two days.

The school district told ABC News that they take the well-being and safety of students and staff very seriously.