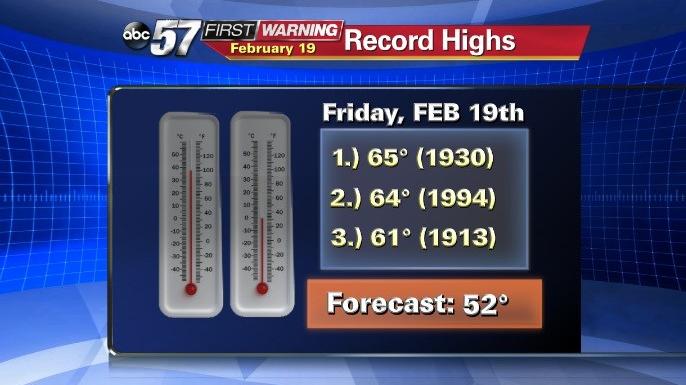 As we look ahead to the first 50° high temperature for the month of February since 2013, we look back at the warmest February days on record, specifically the last ten years to find out if surging at least 20 degrees above normal is typical for Michiana to see each February. Notice that February 2009 saw the most days with highs at least 50° with 6 out of 28 days.  Now, let's take those same Februaries and replace the number of days with the actual highest maximum temperature for that February: However, what are the warmest temperatures ever reached in South Bend for the month of February? Here's the answer below: This Friday, the forecasted high temperature as of Wednesday, February 17th is 52°.  As shown below, there's no doubt it will be unseasonably warm, however, it is safe to say that it will not be record-breaking. As always you can stick with ABC-57 News on the air, online, and on social media for the very latest updates to your forecast.