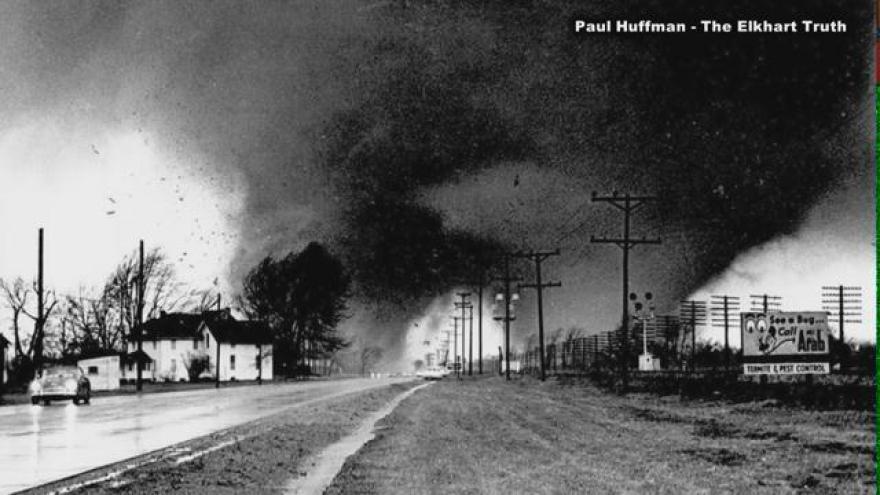 There are countless stories and write-ups on the Palm Sunday tornadoes. Including one of the most famous tornado photos ever taken by Elkhart Truth photographer Paul Huffman. The twin twisters roared through Dunlap in Elkhart County and killed 37 people.

What makes Palm Sunday stand-out is we've never seen anything close to it before or after in Michiana.

The most frequent severe weather in Michiana is a squall line. A fast moving line of severe thunderstorms with gusty straight line wind, that sometimes spawns weak, short-lived tornadoes.  Like last July first.

Palm Sunday saw long lasting super cells, storms more typical to Oklahoma, the type that went through Moore. As we saw Thursday in Illinois, they can also happen in the Midwest.

The palm Sunday tornadoes prompted major advances in giving the  first warning of severe weather, including; issuing watches and warnings , using TV and radio and building a wider radar network.

We remember Palm Sunday 1965 for many reasons including those that lost their lives locally, and we work hard so that when severe weather strikes you'll be prepared and safe.

The National Weather Service of Northern Indiana will live tweet the events that unfolded 50 years ago Saturday afternoon, you can join in with the #PlamSunday50.

* The "F" Fujita Scale for rating Tornadoes was replaced with the "EF" Enhanced Fujita, but for this explanation purpose, we're talking about the same thing.