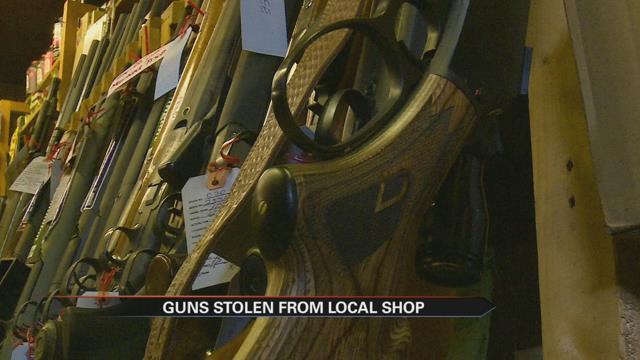 When Dennis Reichard's dog woke him and his wife up at around 3:30 a.m. Sunday morning, he knew something as wrong.

"Instantly, I knew we were burglarized ..we'd been ripped off," Reichard recalls.

His gun shop was broken into, and 57 guns were gone.

"If you scan these cases, you'll see that there's nothing in them.  And there were literally stacked in here on top of each other,"  he says.

Aside from the financial loss, which is an estimated $40,000, he's worried what having those guns in the wrong hands can do.

"People might get injured from their misuse from the criminal element that took them and will use them," Reichard says. "Because they don't use them for good."

He and the Fulton County Sheriff, Christopher Sailors, have some ideas of what the guns may be used for.

"More than likely, it's guns traded for drugs, the way we look at it, it's a possibility," says Sheriff Sailors.

But Reichard is confident that the criminals will be found. As a retired Rochester Police Detective, with 36 years of experience, he's sure the team will find thieves.

"Whoever these guys are, they'll get caught. They will get sentenced and they will go to prison," Reichard says. "Every firearm has a serial number that serial number can't be destroyed. It will be traced."

He hopes that justice and will be served.

But he's not letting it stop him. Tuesday afternoon, there were already plans for a shipment for 30 guns to come into the shop.

Anyone with information is asked to contact the Fulton County Sheriff's Department.

Both Sheriff Sailors and Reichard hope that with the public's help, the stolen guns can get off the streets.