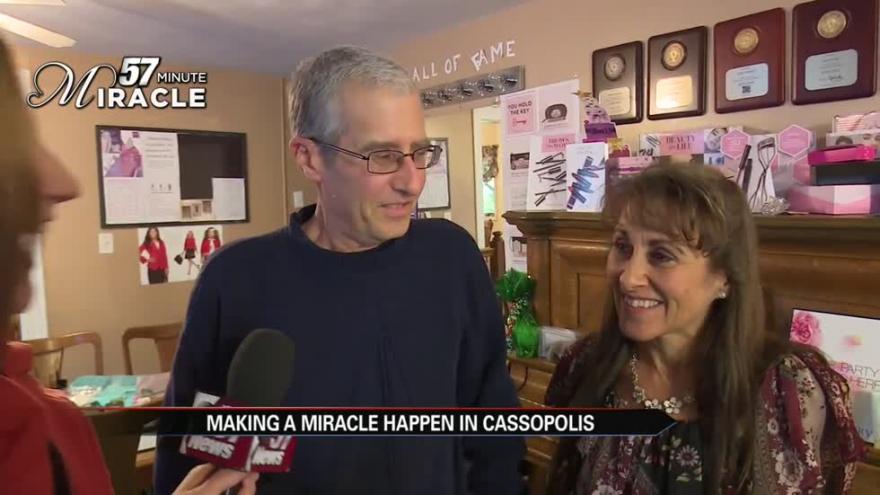 CASSOPOLIS, Mich. -- The 57 Minute Miracle team convinced a woman buying her mom a birthday bouquet to help deliver an even bigger surprise to her cousin battling cancer.

ABC 57's Jess Arnold caught up with Karen Wright outside of Village Floral in Cassopolis.

After buying those birthday flowers, she led the team about five blocks away to her cousin, Reid Francis's house.

Reid, and his wife Janet, said they felt like they already had their miracle--just the fact that he survived the year.

"Well thank you, we didn’t expect that. We feel almost undeserving," said Janet.

Undeserving, however, they are not.

”When you said somebody who needed a miracle, you know Reid’s pretty much had a lot of his miracle happen, but his journey isn’t over yet with cancer…they’ve had a lot of extra expenses because of travel," said Karen.

“I got the diagnosis in January—I ended up having kidney failure—then started kind of an integrated route with chemo and natural stuff, but then in that process, I found out that I had contracted for short it’s called C. diff, which affects my colon, so had to have emergency surgery to take that out, so lots of complications with that. couldn’t eat and was basically going into starvation," said Reid.

“That was probably the hardest thing as his wife, just watching him starve to death and...our big goal is our third son was married on August 18...and as we were getting closer, we were getting in worse trouble...And the goal was to dance at our son’s wedding, and God is good, because not only was he able to be there, he was able to dance. I mean with support, the walker sitting on the side, but it was an amazing journey," said Janet.

“When you’re in this situation, just keep a positive attitude. As I tell her, I don’t have cancer, it’s gone. That’s the way I look at things, and every day I’m getting better and stronger and just keep pushing on," said Reid.